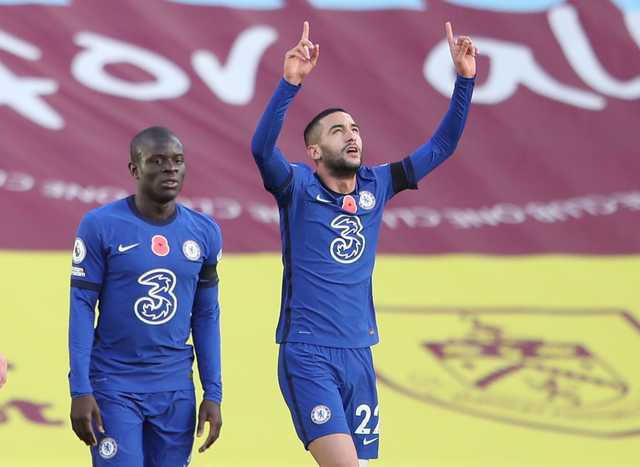 BURNLEY - Hakim Ziyech shined and Kurt Zouma and Timo Werner were also on target as Chelsea enjoyed an easy 3-0 win at struggling Burnley in the Premier League on Saturday.

The win moves the London club up to fourth place in the table and just a point behind leaders Everton and Liverpool before Juergen Klopp's side play West Ham United later on Saturday.

Chelsea, who had a long trip to Krasnodar in Russia in midweek, made five changes from Wednesday's Champions League starting line-up and made a bright start at Turf Moor.

The impressive Ziyech drilled the ball home in the 26th minute from the edge of the box, after a smart passing move from Frank Lampard's team, to claim his first league goal for the club.

Burnley, who are without a win and have just a single point from their opening six games, struggled to cause any real problems for the Chelsea defence and manager Sean Dyche threw on an extra striker at the break with Jay Rodriguez coming on.

While that gave Burnley more of an attacking presence, Chelsea comfortably dealt with early second-half pressure from the Clarets and then extended their lead in the 63rd minute when Zouma thundered in a header from a Mason Mount corner.

The outcome was put beyond any doubt when Burnley midfielder Ashley Westwood's pass was intercepted by Reece James and Ziyech did well to feed Werner, the German confidently beating Nick Pope from inside the area.

Chelsea substitute Olivier Giroud had an effort ruled out for offside as the visitors looked to add to their tally.

"It was a very complete performance from us," said Lampard, whose team have now kept clean sheets in their last four games in all competitions.

"We controlled massive parts of the game, so I’m very happy. Performances like this show that we’re doing something positive. We need to get our heads down and keep working hard," he said.

Burnley's winless start has them stuck at the bottom of the table after their opening six games but Dyche said there is no question of his team panicking.

"I don't panic in general, to be honest, I'm not that sort of fella. I don't think panicking will change anything. I think structure, organisation and hard work, that may change things," he said.