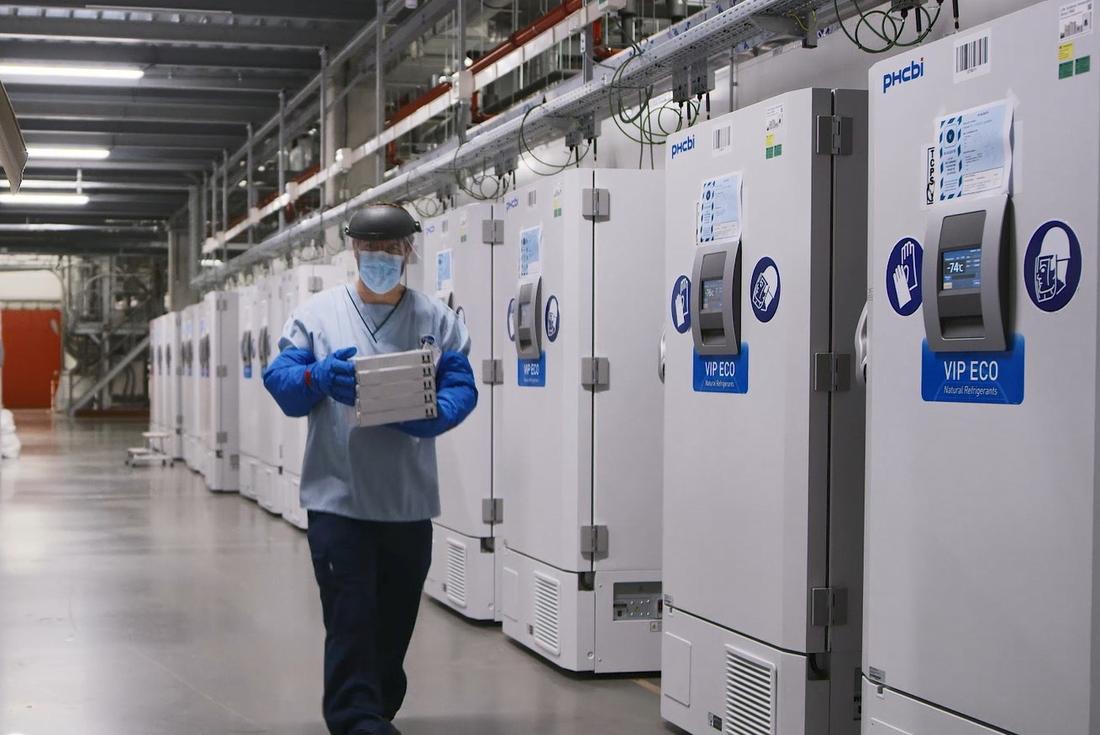 A worker passes a line of freezers holding coronavirus disease (Covid-19) vaccine candidate BNT162b2 at a Pfizer facility in Puurs, Belgium in an undated photograph. Pfizer/Handout via REUTERS

US states, cities, and hospitals are scrambling to buy ultra-cold freezers that can safely store Pfizer Inc's Covid-19 vaccine, ignoring advice from the US Centers for Disease Control and Prevention (CDC) to hold off.

The push reveals a lack of infrastructure to support a super cold vaccine campaign, including equipment to store millions of doses of Pfizer’s vaccine at temperatures of minus 70 degrees Celsius (minus 94°F), significantly below the standard for vaccines of 2-8 degrees Celsius (36-46°F).

Some speciality freezer makers warn of months-long waits for units.

It also marks widespread wariness of the advice from the CDC, which on Aug. 26 urged healthcare providers not to purchase ultra-low temperature (ULT) freezers, saying it was working on solutions for Pfizer’s “very complex storage and handling requirements.”

A CDC spokeswoman on Thursday said the agency expects the first vaccine doses will be in limited quantities and rapidly deployed, reducing the need to store them in specialised freezers.

But the news on Monday that initial results from a pivotal trial of the vaccine developed by Pfizer and German partner BioNTech showed it to be more than 90% effective has turned attention to eventual shipping and storage logistics.

That has thrown a spotlight on makers of the niche freezers, including Thermo Fisher Scientific Inc, Luxembourg's B Medical Systems, Helmer Scientific and Stirling Ultracold, who are adding labour and expanding capacity.
“I would estimate that a third of states are purchasing ultra-cold storage equipment,” said Claire Hannan, executive director of the Association of Immunisation Managers, a nonprofit representing state and local public health officials who handle vaccines.

Moderna Inc is close to releasing efficacy results for its similar vaccine, which requires an easier to accommodate storage temperature of minus 20 degrees Celsius (minus 4°F).

At least half a dozen states, including California, Rhode Island and New Mexico, said in published comments to the CDC that they expect to face challenges due to limited supplies of ULT freezers. A similar number told Reuters or said in public filings that they are purchasing units in anticipation of the vaccine rollout.

Kentucky Governor Andy Beshear on Thursday called for federal funding for cold storage and said he hopes other vaccines with less onerous storage requirements get approved.

Earlier this year, due to lack of a coordinated federal response to the pandemic, states were forced to compete against each other for everything from protective N95 masks for healthcare workers to ventilators and testing equipment.

While demand for ULT freezers is climbing, it has not entered the early pandemic’s ventilator panic phase where “we had lead times of 18 months,” said Rebecca Gayden, who oversees sourcing of freezers and other capital equipment at Vizient, a purchasing group used by more than 5,000 not-for-profit health systems and affiliates.

Northwell Health, New York state’s largest hospital system, said it has leased around 20 ultra-cold freezers for the Pfizer vaccine, and that manufacturers now had waiting lists.

Thermo Fisher said it built up inventory ahead of demand and is unaffected by capacity crunches.

Some smaller manufacturers, however, acknowledged issues due to the surge in demand. Indiana-based Helmer Scientific said production of new orders has pushed into next year.

George Gerhardt, the emergency preparedness program representative for North Dakota, where the virus is now running rampant, said his state started shopping for freezers this summer. “If we wait till the last day, everybody’s going to want one,” Gerhardt said at the time, before purchasing 10 ULT units.

The Wyoming Department of Health was not so lucky. Its ULT freezer is on “back order” until late December, said public information officer Kim Deti.

Cities and states are searching university labs, hospitals and other facilities for available ULT freezer space.

Philadelphia is spending about $19,000 on two B Medical freezers scheduled to be installed later this month and is working with local healthcare systems to secure additional capacity.

Pfizer’s vaccine could get regulatory approval within weeks with distribution to begin almost immediately.

It will be transported in dry ice-filled, suitcase-sized containers that can only be opened twice a day and last a maximum of two weeks. Dry ice has also been offered as a potential solution for nations without access to ULT storage in vaccination centres.

“Waste is a major concern,” said Soumi Saha, vice president of advocacy at Premier Inc, which coordinates purchases for thousands of US hospitals and health systems. “Do you turn a patient away because you can’t open it a third time that day?”