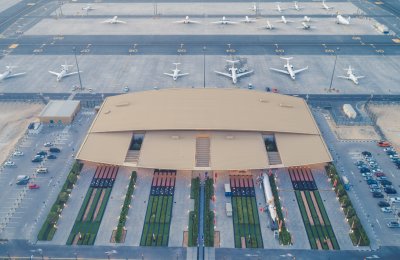 Work is in full swing at the Mohammed Bin Rashid Aerospace Hub (MBRAH), the region’s first aerospace destination, with 70 per cent of the infrastructure development work already completed, reported state news agency Wam.
Established in 2017 as Dubai’s Aviation District and rebranded as MBRAH last year, it is home to an infrastructure that is dedicated to a diverse aviation ecosystem, accommodating commercial, freight, business jets, and aircraft maintenance operations as well as customer-centric, business-friendly solutions for companies, while also offering 100 percent free zone benefits and services.
The Hub is hosting big players like Emirates Pilot Training Academy, Lufthansa Technik and General Electric, GE, as well as Dynamic Advanced Training for Cabin Crew Training, stated the report citing a senior official.
The industry partners have completed 30 per cent of their projects in the Hub, its CEO Tahnoon Saif told Wam in an exclusive interview.
MBRAH, based in Dubai South, is expecting more opportunities in MRO (maintenance, repair and operations) sector, as some companies want to focus on their core airline business and liquidate their engineering elements in the current challenging business environment, he stated.
On the plan to complete the development work by 2030, Saif said: "Responding to market changes is very important but the speed of our response and adapting with new realities is more important for us. We developed 70 per cent of the infrastructure with flexibilities to accommodate new solutions that might evolve."
"The airline industry will take a while to recover; however, we are enhancing our value proposition and leveraging our network and access to the world through cargo terminals and Jabel Ali sea port," he added.
As airlines around the world look for cost-effective solutions across their businesses in the current economic climate, Saif is hopeful that it will open new opportunities for the Hub’s services in MRO.
"We are expecting a lot of mergers and acquisitions in the maintenance business over the next 12 months or so, especially given that some companies will want to focus on their core airline business and liquidate their engineering elements," he stated.
With facilities across the MRO framework comprising engine overhaul and component warehouses to landing gears, Saif said the aerospace hub in Dubai South is a one-stop shop for all maintenance-related work.
"So in terms of service offering, we have the infrastructure and remain relentless in targeting key players from around the world," he added.
On the key projects in the Hub, Saif said: "We are progressing well with our projects, having signed two important agreements, one is the heliport with Air Chateau for multiple operators. They are partnering with us to build the facilities for maintenance and VIP Terminal services."
"We laid out the infrastructure, they built the facilities and would attract helicopter operators for maintenance and for commuting from the VIP terminal," he noted.
"We will also see Execujet have new hangar and maintenance facilities within the next 18 months. Also we signed with an investor to set up a luxury vault to store and safeguard high valued items. Such facilities are well established in Europe and Asia but not in the Middle East," he added.
Saif pointed out that till date, AED2.5 billion ($680 million) has been invested by the government and the private sector in the Hub, and "we are expecting a higher growth rate when Al Maktoum International airport takes off with the commercial airline operations."
The ultimate investment in the region's first aerospace destination is expected to reach AED17 billion ($4.63 billion) by 2030, he added.