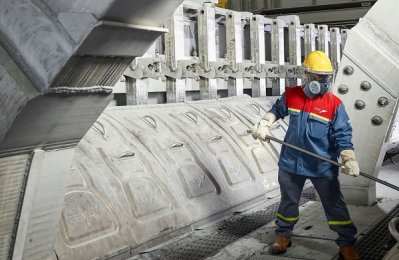 Emirates Global Aluminium (EGA), the largest industrial company in the UAE outside oil and gas, has signed an agreement with South American industrial group Neo Aluminio Colombia to provide an array of technical services to the Colombian company during the construction and ramp-up of the project.
The deal could lead to the export of EGA’s UAE-developed smelting technology for the development of the first aluminium production facility in the South American country.
NEO Aluminio Colombia is currently assessing the feasibility of building a low carbon aluminium production facility, the Green Aluminium Transformation Complex for Colombia (Galtco), in the northwest of the country.
The project, powered with hydroelectricity and intended to reach a capacity of 540,000 tonnes of aluminium per year, would be the heart of a new industrial cluster creating jobs and economic opportunity.
In 2016, EGA became the first UAE industrial company to license its core process technology internationally, in a major milestone for the development of a knowledge economy in the UAE.
Aluminium Bahrain’s Line 6 expansion project, built with EGA’s DX+ Ultra technology, began production in December 2018.
The agreement envisages EGA licensing its UAE-developed aluminium smelting technology to NEO Aluminio Colombia, and providing an array of technical services to the Colombian company during the construction and ramp-up of the project, said its CEO Abdulnasser Bin Kalban after signing the deal with Neo Aluminio Colombia CEO Carlos Santiago.
Kalban pointed out that EGA had been developing aluminium smelting technology in the UAE for more than 25 years.
"We are using our own technology in every smelter expansion since the 1990s and have retrofitted all our older production lines. EGA’s latest technology is amongst the most efficient in the global aluminium industry," he stated.
Kalban said technology innovation had been an important foundation of EGA’s development and success.
"One of our strategic priorities is to make EGA the technology partner of choice for new smelter projects, building on our success in Bahrain and strengthening technology sales as a revenue stream for our company. We look forward to growing this project with NEO Aluminio Colombia and ultimately to the successful application of EGA’s UAE-developed industrial technology in their project," he added.
Santiago said finding the right technology partner was an important milestone in the development of its proposed new aluminium transformation complex.
"After a global search, we have selected EGA based on the performance of their technology, the depth of their technological expertise, and their track record in some of the world’s most significant recent greenfield and brownfield production developments," he noted.
"Ultimately, we are proud and honoured to have a partner that cares, as we do, about creating both jobs and opportunity for decades to come," he added.
Neo Aluminio Colombia is part of the Neo Group, which manufactures aluminium vehicle wheels and electrical cables in Argentina, Brazil and Venezuela for sale within and beyond South America.-TradeArabia News Service