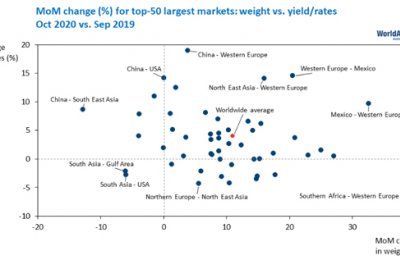 Worldwide air cargo has bounced back steadily from a steep fall in April, resulting in an October-performance of ‘only’ 11% below October 2019, but 8% above September 2020.
Air cargo had contracted by 1/3 year-over-year (YoY) in April 2020 says WorldACD Market Data.
Since that very steep decline, the sector Airline revenues from air cargo kept rising: +48% YoY, thanks to a still very high price per/kg, which has hovered between 60% and 67% above last year for the past 4 months, culminating in an October increase of 66% YoY and 4.3% MoM.
All this happened with freighter capacity increasing by 5% MoM, whilst cargo capacity on passenger aircraft grew by 11% MoM. The load factors for the two aircraft types increased by a modest 2% respectively 1% over the month of September.
At the risk of sounding like a broken record, we report that – among the three largest regions – the origin Asia Pacific did best again in volume in October, falling 7% YoY, but recording the one-but-highest YoY increase of price/kg (+82.4%). The origin area Middle East & South Asia (MESA) almost doubled its prices for the month of October YoY. The MoM price increase ex-Asia Pacific was 9.4% against a worldwide average of 4%: in 2019 the MoM increase ex-Asia Pacific was 5.5%. For the first 10 months of the year, Asia Pacific was the only region keeping its YoY volume loss in single figures (-9.8%), coupled with a record YoY revenue increase of 59%, more than double the worldwide average of 29%.
Most striking is the fact that the share in worldwide air cargo revenues, generated from business originating in the Asia Pacific countries, has gone up from 41% in 2019 to 50% in 2020.
The accompanying chart shows how the world’s top-50 air cargo markets performed (MoM) (yield/rates in USD/kg). The markets between Western Europe and Mexico stand out.
China receives the bulk of the attention of air cargo pundits these days. Understandably so: the country is thriving in terms of air cargo price increases, as evidenced by a MoM growth in price/kg of 15.2% (in 2019 the MoM change was 10%). From China to Europe the MoM increase was even higher: 18.7% (14.8% last year).
Air cargo from China to North America attracted a price/kg of $5.11, whilst to Europe the average was $4.33. The weekly trend in both markets is upward, which brings us to the preliminary picture for the first half of November 2020.
Worldwide, the kilograms transported in the period November 1 to 15 (H-1 Nov) stood at 48% of the October-total (from Asia Pacific 51%, Europe & North America 47%, Central & South America 46%, Middle East & South Asia (MESA) 44%, and Africa 42%). In other words, any MoM growth in November will have to come from the second half of the month. Weekly volumes in H-1 Nov were more or less the same as in the last week of October.
Yields/rates (per kg) continue their upward movement: worldwide the average went from $3.13 in the last week of October via $3.25 in the first week of November to $3.28 in the second week of November. In other words: in week 1, the week-on-week (WoW) increase was 3.9%, in week 2 it was much less (0.9% WoW).
For the first time in many weeks, yields/rates from China dropped. Whilst they were up by 3.8% WoW in the first week of November, in the second week they were down by 2.5% WoW: China-Asia Pacific -9.5% (at $2.20), China–Europe -0.9% (at $5.08), China-North America -6% (at $5.93).
Incoming business into Asia Pacific saw a downward trend: yields/rates dropped by 0.8% WoW on average, whilst this figure was slightly up for all other destination regions.
The average load factors were slightly lower in H-1 November than in October. We did not see a WoW change in last week’s data, except for the load factors ex-Europe which went up by more than 1.5 percentage points.-- Tradearabia News Service