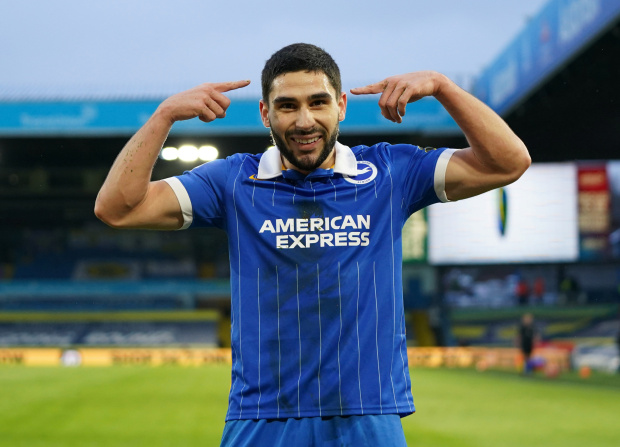 Neal Maupay scored the only goal as Brighton & Hove Albion snapped a nine-game run without a Premier League victory, with a 1-0 win over a lacklustre Leeds United on Saturday.

Leeds made an encouraging start, with Rodrigo inches away from connecting with Ezgjan Alioski's cross from the left in the seventh minute, but it was Brighton who went on to claim their first-ever top-flight victory at Elland Road.

Maupay struck in the 17th minute, finishing off a flowing move started by Alexis Mac Allister, who burst into the Leeds box after a quick exchange of passes with Leandro Trossard before squaring the ball for the Frenchman to tap home.

"Everything worked well today, we defended together and attacked pretty well. It's a huge result for us," Maupay said after Brighton's third victory in 19 games this season. "We have quality, but we need to push on and get more wins."

Leeds, who had a number of absentees, including influential midfielder Kalvin Phillips, looked tired and their failure to implement their trademark pressing game and create clear chances will be a worry for manager Marcelo Bielsa.

"The two basic aspects of our game were lower, which is to make it difficult for the opponent when they have the ball and to generate chances on goal," Bielsa said. "To concede goals and not to score is always a worry. Today, we didn't attack well."

Patrick Bamford squandered a chance to equalise two minutes after Brighton had scored, when he scuffed his shot with the goal at his mercy after Raphinha's low cross.

Trossard nearly extended Brighton's lead in the 24th minute, but the Belgian cannoned his shot off the crossbar after charging virtually unchallenged into the Leeds box.

Leeds, who did not have a shot on target in the first half, improved after the interval but still did not seriously trouble Brighton's five-man defence, with Bamford again going closest to scoring when he headed Pablo Hernandez's cross wide.

Brighton passed up another chance to extend their lead on the hour mark, when Trossard smashed over from inside the Leeds box after running on to Maupay's clever cutback.

The victory moved Brighton up to 16th in the table on 17 points, while Leeds stay 12th on 23 after their ninth league defeat of the season.