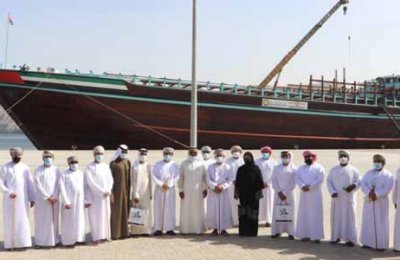 Officials pose in front of the largest dhow
The Khasab Port in Oman has received the world’s largest wooden dhow, Obaid.
The dhow measures 91.47 m long and 20.41 m wide, which is the length and almost half the width of a standard American football field floating over the Indian Ocean, according to Guinness World Records (GWR),  Oman Observer report said.
Balancing this huge structure on either its bow or stern vertically would make this dhow stand almost as tall as the Big Ben in London, says GWR.
The dhow, which stands at a height of 11.229 meters, and weighs 2,500 tonnes, is built by an Emirati shipbuilder Obaid Jumaa bin Majid al Falasi
It has been constructed from material sourced both locally and abroad and will have an estimated load capacity of up to 6,000 tonnes.
The ship is built from approximately 1,700 tonnes of wood and 800 tonnes of steel.
The dhow is powered by two 1,850 horsepower engines and will be used to transport cargo from the UAE.
“At a speed of 14 knots, it will be enough for this dhow to operate and achieve its desired ROI. Who knows, you might see this dhow docking at different ports all across the world.”