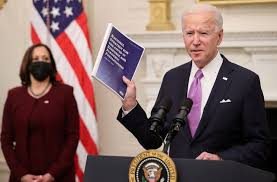 The United States will back a global plan to combat Covid-19 and get vaccines to poorer countries as part of a national strategy unveiled by President Joe Biden on Thursday, which includes pushing Congress for more funding for international efforts.

Global re-engagement has been among Biden’s priorities since taking office on Wednesday and one of his first actions was to rescind former President Donald Trump’s planned withdrawal from the Geneva-based World Health Organisation (WHO).

Under the U.S. Covid-19 strategy, Biden will direct his secretary of state and secretary of health and human services to notify the WHO and the GAVI vaccine alliance of Washington’s intent to support the Access to Covid-19 Tools (ACT) Accelerator and join its COVAX facility.

The ACT-Accelerator programme and its COVAX facility are the global plans to tackle the pandemic, aiming to deliver 2 billion doses of coronavirus vaccines by the end of 2021, 245 million treatments and 500 million tests. The first vaccine batches are expected to go to poorer countries in February.

“The Biden-Harris Administration will seek funding from Congress to strengthen and sustain these efforts, as well as other existing multilateral initiatives involved in fighting Covid-19,” according to the strategy, which also calls for Washington to work on a way to donate any future U.S. vaccine surplus.

In December the U.S. Congress allocated $4 billion for the global response to the pandemic, including vaccine procurement and delivery. But Biden’s nominee for secretary of state, Antony Blinken, warned that “additional resources are likely to be to be needed.”

So far the ACT-Accelerator has received $6 billion and the U.S. pledge of $4 billion, but still needs another $23 billion.

Blinken said it was in the U.S. national interest to make sure vaccines are effectively and quickly distributed globally.

“We’re seeing the potential for a debt crisis among emerging economies and developing economies. We’re seeing public health crises in the country after country because Covid has made it more difficult to provide other health services,” Blinken said.

“We’re seeing state fragility increase, not decrease ... so we have an actual interest in helping,” he said on Tuesday.

Blinken also described WHO as an “imperfect organisation in need of reform,” but said it was better to tackle it as a member. Trump had cut funding to the WHO last year and announced plans to quit the body over accusations it was a puppet of China, which WHO denied.