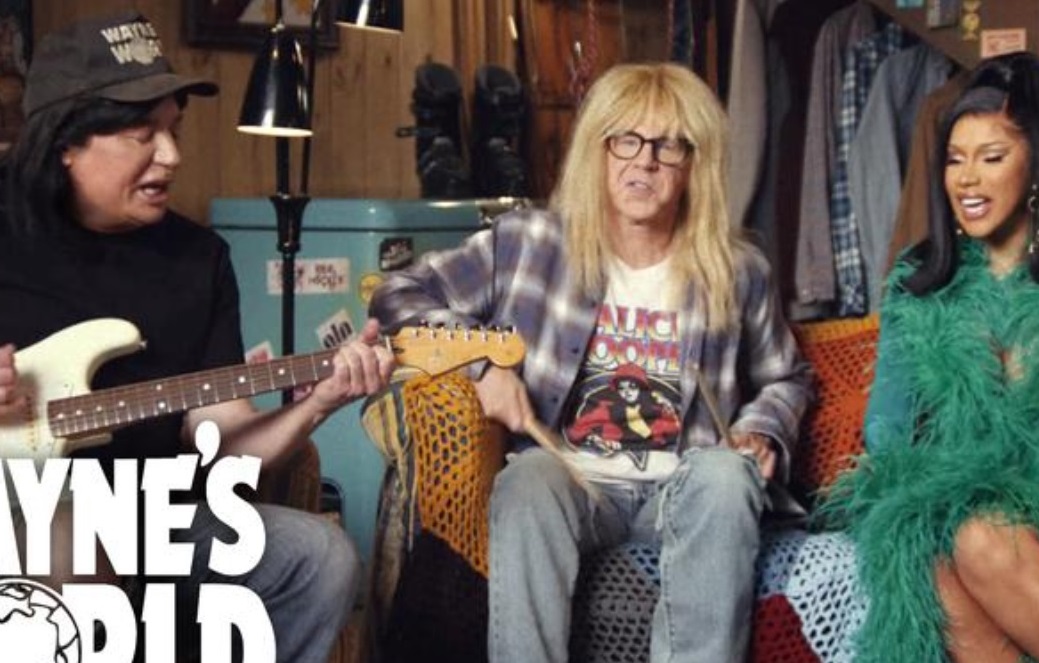 Rapper Cardi B appears with Mike Myers and Dana Carvey as their "Wayne's World" characters in this undated handout photo obtained by Reuters on February 3, 2021. Uber Eats/Handout via REUTERS.

In a teaser ad Uber Eats released ahead of the Super Bowl, actor Mike Myers, reprising his role as Wayne from “Wayne’s World,” tells sidekick Garth what is on everybody’s mind: “2020, man, that was a great year...not.”

The celebrity-laden ads aim to inject some humour and levity into the year’s most-watched US televised event after 11 months of social distancing and lockdowns.

Longtime advertisers Anheuser-Busch InBev’s Budweiser and Coca-Cola are sitting out the match-up between Kansas City and Tampa Bay to fund Covid-19 vaccine efforts or save money.

Their absence makes room for a new roster of advertisers that have boomed as the world faces a third wave of the health crisis, marketing experts said.

“I’ve never seen this many first-timers as a percentage of the advertisers,” said Charles Taylor, a Villanova University professor of marketing.

Grammy-winning rapper Cardi B will join Wayne and Garth to sing a jingle and tell viewers to eat locally, kicking off a $20 million Uber Eats campaign to support independent restaurants.

Logitech, maker of computer keyboards and webcams which consumers rushed to buy as they worked from home, recruited rapper Lil Nas X to appear in a spot reflecting how artists have used technology “to create the future,” set to his newest song.

Some upstart brands found ways to poke fun at rivals while touting their business model as safer during the pandemic.

In a commercial for Vroom, a man sits strapped to an interrogation chair as he attempts to buy a car from a traditional dealership.

Despite the pause by perennial advertisers, ViacomCBS’s CBS broadcast network last week said it had sold out commercial time for the game.

A 30-second ad sold for about $5.5 million this year, about the same as last year, said a person familiar with the matter.

“With bigger names pulling out, it gives us a chance to break through even more than we expected,” said Peter Scherr, chief marketing officer at Vroom.

While Super Bowl advertisers usually go for laughs or tug at viewers’ heartstrings, brands are skating a fine line to avoid insensitive humour - no gerbil shot from a cannon this year - or further depress sports fans after an emotionally draining 2020, ad experts said.

Humorous ads are more likely to be uplifting, rather than “knee-slapping sophomoric humour,” said Leeann Leahy, chief executive of VIA Agency, which has worked on past Super Bowl spots for Johnson & Johnson and Lowe’s.

System1, an agency that analyses consumer responses to ads, said early testing shows Super Bowl teasers that use nostalgia and escapism as themes are proving popular with audiences, with Uber Eats being one of the top teasers as of Wednesday.

And although Budweiser will sit out the game for the first time in over 35 years, the brand’s owner, brewing conglomerate Anheuser-Busch, will air an ad for the first time at the Super Bowl reflecting its optimism for the end of the pandemic as vaccines roll out.

The commercial, part of the company’s two-year $1 billion economic recovery campaign, features a montage of people in normal times, including a woman who offers to buy a beer for her laid-off coworker and old friends catching up over a drink.

“Everyone is saying, ‘I can’t wait to get together again,’” said Marcel Marcondes, U. chief marketing officer at Anheuser-Busch.