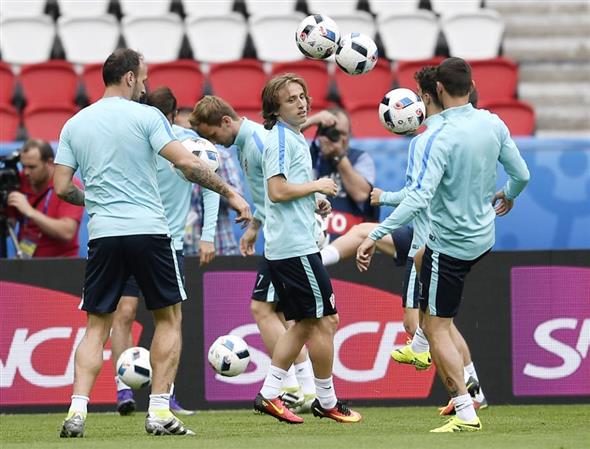 Paris: Before even kicking off at the European Championship, Croatia and Turkey is talking boldly of taking places in their national soccer history.

Croatia's team at the European Championship is one of the best that's been sent to a major competition in the country's relatively short history, according to long-time captain Darijo Srna.

Turkey coach Fatih Terim talked about his team ahead of Sunday's first match as a potential new era for the Euro 2008 and 2002 World Cup semifinalist which has lost just once in 16 matches.

"If Emre (Mor) plays in the starting lineup we will be the youngest side," Terim said Saturday at the Parc des Princes stadium. "You don't catch a generation, you create a generation. It takes a huge effort."

Now aged 34, Srna played at Euro 2004 when Turkey's newest prospects were kids. Mor, who has recently signed with Borussia Dortmund, was six years old and midfielder Hakan Calhanoglu was 10.

The Shakhtar Donetsk defender is playing at his fourth European tournament alongside a string of Champions League winners, including Real Madrid's Luka Modric and Barcelona's Ivan Rakitic.

"I think we have one of the best teams in the history of Croatian football," Srna said through a translator on Saturday. "There is a big euphoria in our country."

Croatia has not managed to go beyond the quarterfinal stage at any of its previous European Championship appearances. It did reach the semifinals at the France-hosted 1998 World Cup, its first since the country gained independence from the former Yugoslavia a quarter of a century ago.

Srna acknowledged that two-time defending champion Spain is the best team in Group D that also includes the Czech Republic. Those teams play on Monday in Toulouse.

"But probably we are favourites for second in the group," Srna said.

Having high quality individuals isn't enough "if you're not focused on the match" as a team, Srna said.

"(On Sunday), we have to be smart," he said, pointing to Romania's impressive effort in losing only to Dimitri Payet's outstanding late goal for France on Friday.

Croatia and Turkey have history.

At Euro 2008, Croatia gave up a late, extra-time goal to Turkey when seconds away from a place in the semifinals. The team, which also included midfielders Modric and Rakitic, lost the ensuing penalty shootout.

"It was a really painful defeat," recalled Srna, the only Croatian to score in the shootout as the two midfield stars failed from the spot. "Turkey has shown that you have to play until the very last second. That shows their mentality is very strong."

Terim, who was Turkey's coach eight years ago during the second of his three national team spells, dismissed a question about revenge being Croatia's motivation.

"We have played Croatia many times. We consider them our friends," he said through a translator, adding that he respected his opponent's experience.

"Our players may have some difficulties in the beginning," Terim acknowledged. "I think it will take only five or 10 minutes to adapt.

Croatia coach Ante Cacic suggested his "good mix" of veterans, including Juventus forward Mario Mandzukic, and newcomers is ready for a big tournament.

"We just have to connect all this individual quality and focus on the team to be at the top level," Cacic said through a translator, ahead of making his own tournament debut.