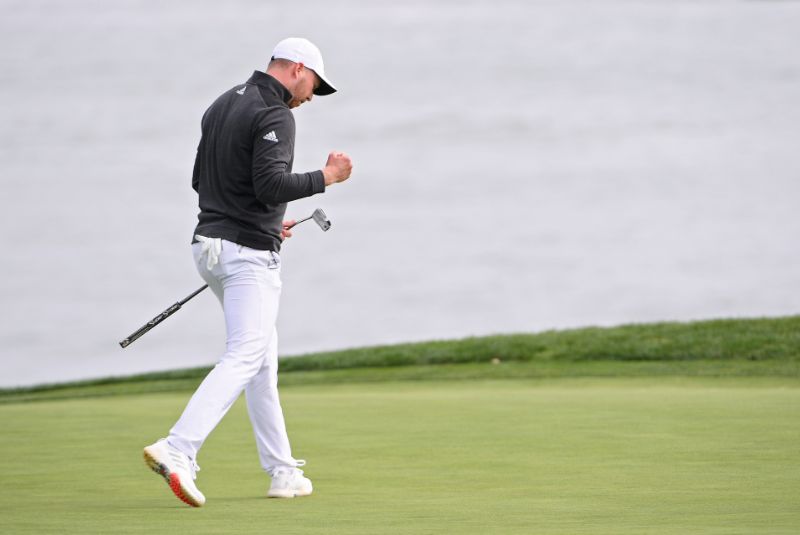 Daniel Berger stole the show -- and sealed his fourth career PGA Tour win -- by draining a 31-footer for eagle at 18 on Sunday to win the AT&T Pebble Beach Pro-Am in Pebble Beach, Calif.

It was the fourth eagle of the week -- and second of the day -- for Berger, who came to the 72nd hole tied with Maverick McNealy. But the eagle at the famous par-5 finishing hole at Pebble Beach Golf Links moved Berger ahead by two to finish with a 7-under 65 and 18-under 270 total.

"(It's) probably right up there at the top," Berger told CBS Sports about his putt following his win. "That was probably the best putt I have ever hit in my life. ...

"I've worked so hard in the last six or seven months to get to where I'm at, so it's nice to see the results come."

The 27-year-old Florida native, currently No. 15 in the Official World Golf Ranking, had posted two top-10s in two prior starts at the AT&T Pebble Beach Pro-Am (T-10 in 2015, T-5 in 2020), and last season, he earned his third career victory at the 2020 Charles Schwab Challenge, the PGA Tour's first tournament back following a three-month hiatus due to COVID-19.

McNealy finished with a 66 to take second place at 16 under, one stroke ahead of Patrick Cantlay (68) and third-round leader Jordan Spieth (70), who was coming off his best result in nearly a year -- a tie for fourth place in the Waste Management Phoenix Open last week.

"After leading by two, I had control of my own destiny today and I certainly had enough opportunities to be able to -- even though Daniel went out and shot 7 under -- I could have for sure gotten up there," said Spieth. "So, you know, it stings a little right this second, but I finished strong."

Spieth, who matched three bogeys with three birdies to stay even through 16 holes, finished birdie-birdie to shoot 2 under on the day.

Defending champion Nick Taylor of Canada posted his second consecutive even-par 72 and finished tied for 39th at 4 under.