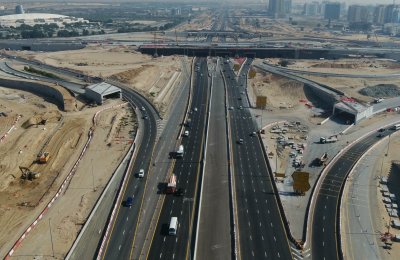 Dubai's Roads and Transport Authority (RTA) has announced that work is progressing at a steady pace on the AED2 billion ($544 million) Dubai-Al Ain Road improvement project which is now nearly 60 per cent completed.
On completion, the project will ensure a smooth traffic flow and enhance the links with key roads in the emirate namely Ras Al Khor Road, Sheikh Mohammed bin Zayed Road, Sheikh Zayed bin Hamdan Al Nahyan Road and the Emirates Road, said RTA in its statement.
It will also serve the existing and future development projects on both sides of the Dubai-Al Ain Road.
According to RTA, the project involves doubling the road’s capacity from 6,000 to 12,000 vehicles per hour per direction and will also cut the journey time on Dubai-Al Ain Road, from Bu Kadra junction to Emirates Road junction, from 16 to 8 minutes during peak hours.
Benefiting 1.5 million people, the project will eliminate tailbacks that used to extend 2 km.
On the project progress, Director-General and Chairman Mattar Mohammed Al Tayer, said: "The Dubai-Al Ain Road Improvement Project is one of the key strategic projects that aims to improve the quality of life in the city and achieve happiness for the community while also strengthening Dubai’s position amongst the world’s safest cities in traffic safety."
Contractors have completed the construction of ramps at the intersection of Sheikh Mohamed bin Zayed Road and Dubai-Al Ain Road in all directions, which are now fully open for traffic.
Work is currently underway on the construction of the main bridge at the intersection to allow turns in all directions in addition to the intersection of Sheikh Zayed bin Hamdan Al Nahyan Road to link it with the extension of Sheikh Zayed bin Hamdan Al Nahyan Road which opened in 2018, he added.
Al Tayer said the scope of works includes construction of a flyover of four lanes in each direction that can be widened to five lanes in the future and improving the existing ramp to serve the traffic from Dubailand Residential Complex heading westwards to Dubai-Al Ain Road in the direction of Dubai.
A new ramp is being constructed to serve the traffic from Dubai heading northwards to Academic City and Dubai Silicon Oasis. The works, which are expected to be completed in the second quarter of next year, also include the construction of service roads on both sides of Dubai-Al Ain Road along with turns to serve development projects.