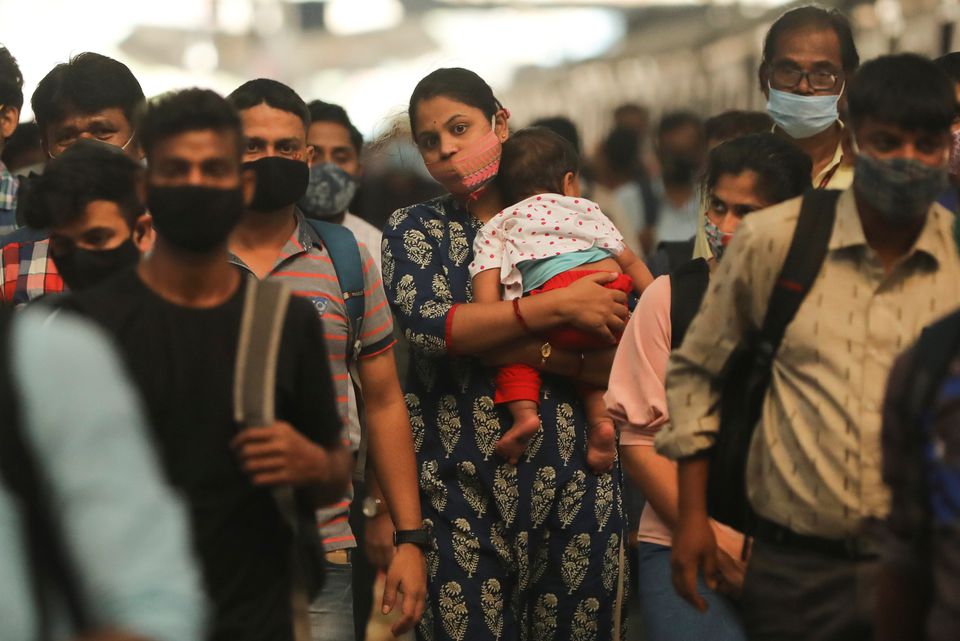 A woman carrying a child walks inside a railway station amidst the spread of the coronavirus disease (Covid-19), in Mumbai, India, February 23, 2021. (Reuters Photo)

India said on Tuesday mutated versions of coronavirus were not responsible for an upsurge in cases in two states, a potential relief for a country where mask-wearing and social distancing have largely disappeared.

Maharashtra in the west and Kerala in the south account for 75% of India's current active cases of about 147,000, and both states have seen a sudden rise in new infections in recent days, fuelling calls for a faster roll-out of vaccines.

India has reported more than 11 million cases - the most in the world after the United States - and about 156,000 deaths. Actual infections have inched closer to 300 million in the country of 1.35 billion, according to a random study of antibodies done by the government.

A top government health official confirmed the long-time presence of two mutants - N440K and E484Q - in those two states as well as elsewhere in the country and abroad. Authorities have also found the UK variant in 187 people in India, the South African one in six and one case of the Brazilian mutation.

"There is no reason today for us to believe, on the basis of scientific information, that these are responsible for the upsurge of the outbreak," Vinod Kumar Paul, who heads a government committee on vaccines, told a news conference.

Though cases have come down sharply since a September peak, Paul said India was still vulnerable, especially given that even previously badly affected cities like Pune in Maharashtra were getting hit again. He urged people to wear masks and avoid social events - guidelines openly flouted by both federal and state ministers.

The northern state of Punjab, which has also seen a rise in cases, said indoor gatherings would be restricted to 100 and outdoor to 200 from March 1. District heads have also been permitted to decide on night curfews in hotspots, and testing will be increased, the state's chief minister said.

Punjab is one of the worst performing states in vaccinating their healthcare workers, according to the federal government.

The government on Tuesday asked five states, including Maharashtra and Punjab, to expedite vaccination of their healthcare and frontline workers in light of the surge in cases, according to letters shared by the health ministry.

India has given nearly 12 million doses to its health and frontline workers since beginning the campaign in mid-January, a pace that will have to be increased sharply to meet the target of reaching 300 million people by August.

Health Secretary Rajesh Bhushan said India would very soon start immunising people over 50 and those with medical conditions, with greater involvement from private hospitals. Government hospitals are now running around 80% of vaccination sites.

The government has recently come under pressure to expand coverage at home given the world's largest vaccine maker has exported COVID-19 shots to more than two dozen countries.

India is using a vaccine developed by Bharat Biotech and the state-run Indian Council of Medical Research, and another licensed from AstraZeneca and Oxford University. Other vaccines are in the queue, including Russia's Sputnik V and products from Cadila Healthcare and Novavax.