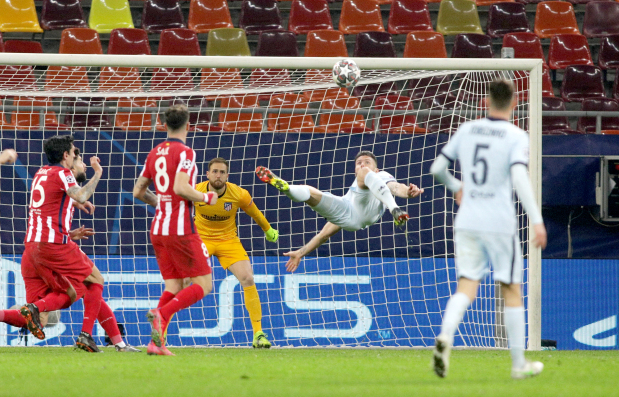 Soccer Football - Champions League - Round of 16 First Leg - Atletico Madrid v Chelsea - Arena Nationala, Bucharest, Romania - February 23, 2021 Chelsea's Olivier Giroud scores their first goal Inquam Photos via REUTERS/Octav Ganea ROMANIA OUT. NO COMMERCIAL OR EDITORIAL SALES IN ROMANIA.. THIS IMAGE HAS BEEN SUPPLIED BY A THIRD PARTY. IT IS DISTRIBUTED, EXACTLY AS RECEIVED BY REUTERS, AS A SERVICE TO CLIENTS.

The French striker broke the deadlock in the 68th minute with an outrageous bicycle kick which was flagged offside but eventually given following a lengthy VAR review as the ball had come off Atletico’s Mario Hermoso before Giroud hit it.

Joao Felix had attempted an overhead effort earlier in the second half but missed the target in one of few chances for Atletico, who were forced to play their home leg over 3,000 kilometres from Madrid due to Spanish restrictions on arrivals from Britain to control the spread of Covid-19 infections.

Chelsea looked more likely to find a second goal than Atletico did an equaliser but Thomas Tuchel’s side will be without Mason Mount and Jorginho in the second leg at Stamford Bridge on March 17 as they will be suspended after being booked.