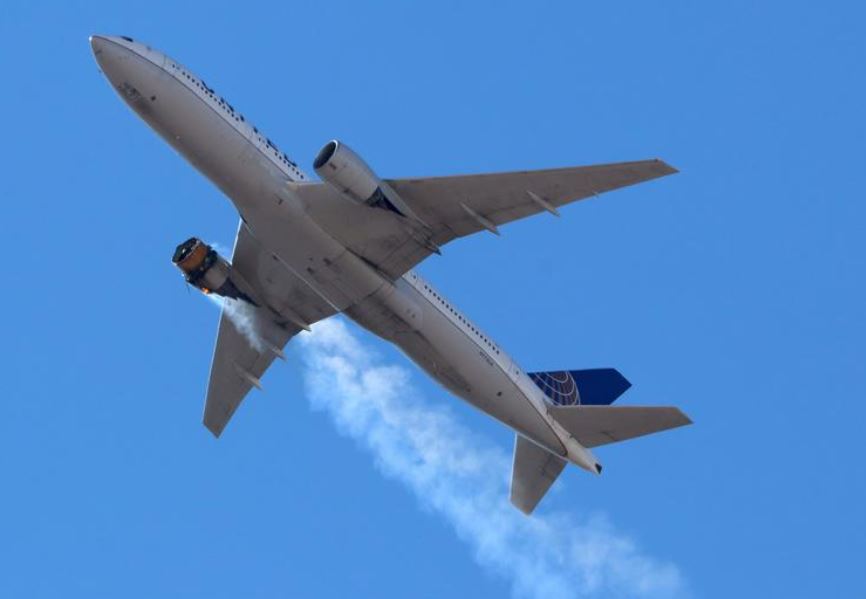 REUTERS FILE PHOTO: United Airlines flight UA328, carrying 231 passengers and 10 crew on board, returns to Denver International Airport with its starboard engine on fire after it called a Mayday alert, over Denver, Colorado, US February 20, 2021. (Image credit: Hayden Smith/@speedbird5280)

Dubai: The UAE General Civil Aviation Authority (GCAA) has announced that it is closely working with the US Federal Aviation Administration and monitoring the current situation for any updates on the Boeing 777 aircraft fitted with the PW4000 engine.

This follows an incident where a United Airlines 777-200 aircraft was forced to make an emergency landing at US-based Denver International Airport after suffering engine failure over Denver, Emirates News Agency reported.

"Currently the UAE does not have any UAE registered aircraft operating with PW4000 engines. And, there are no foreign aircraft fitted with the mentioned engine operating to UAE airports and airspace," a statement issued by GCAA said.

"The actions taken by both state of design and state of registries are deemed adequate and there is no need for any additional measures to be taken from the UAE at this stage.

"We are continually monitoring the situation and if there are any further developments and intervention is required it will be taken," it added.

Many airlines around the world have imposed a ban on operating Boeing 777s fitted with Pratt & Whitney PW4000-112 engines after the engine incident.

There were no reported injuries but debris from the plane’s Pratt & Whitney engine was found under its flight path.