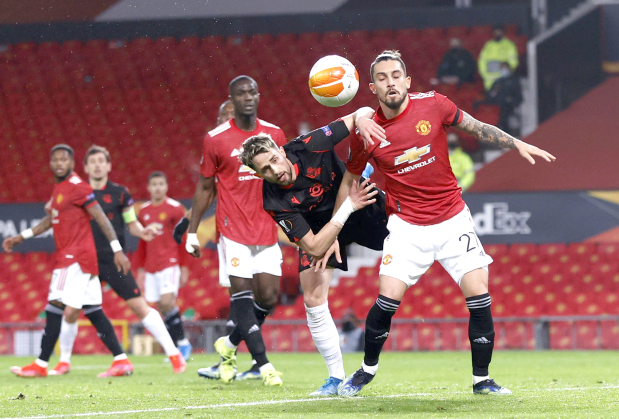 MANCHESTER: Manchester United eased into the Europa league last 16 after a 0-0 home draw with Real Sociedad last night completed a 4-0 aggregate win over the Spanish side in their round of 32 clash.

Sociedad missed a 13th-minute penalty as Mikel Oyarzabal blazed his spot-kick wide before a lethargic United came to life and Bruno Fernandes rattled the crossbar with a swerving shot from 15 metres.

Modibo Sagnan hit the woodwork for Sociedad with a close-range header shortly after the break before United substitute Axel Tuanzebe had a goal disallowed for Victor Lindelof’s foul on Jon Bautista.

Fernandes made way for Rashford at the interval but United largely went through the motions in the second half as they kept the visitors at bay, with striker Anthony Martial enduring another frustrating evening.

Meanwhile, AC Milan progressed on away goals after struggling to a 1-1 draw at home to Red Star Belgrade, with the visitors playing the final 20 minutes with 10 men as the tie finished 3-3 on aggregate.

Earlier, Arsenal needed a late comeback to secure their place in the draw for the last 16 where they will be joined by Ajax Amsterdam and Rangers but Napoli crashed out.

Pierre-Emerick Aubameyang’s 87th-minute header secured Arsenal a 3-2 win over Benfica for a 4-3 aggregate victory, but the Premier League side had been staring at the exit door.

After the first leg, played in Rome because of COVID-19 restrictions, ended 1-1, Arsenal’s home leg was played in Athens and all looked comfortable when Aubameyang put them in front after 21 minutes.

Diogo Goncalvez curled home a free kick for Portuguese giants Benfica just before halftime, however, and when a terrible mistake by Arsenal midfielder Dani Ceballos allowed Rafa Silva to put Benfica 2-1 ahead just past the hour it looked grim for Arsenal.

Kieran Tierney fired home the equaliser, however, before Aubameyang headed home from close range to seal a dramatic victory.

Ajax beat French club Lille 2-1 for a 4-2 aggregate win although it was tough examination for the Dutch side who needed a late goal by David Neres to calm their nerves.

Scottish Premier League leaders Rangers completed an astonishing 9-5 aggregate win over Belgian side Antwerp thanks to a 5-2 win in Glasgow.

But former winners Napoli bowed out despite a 2-1 victory at home to Spanish club Granada. Having lost the first leg 2-0 they got a perfect start when Piotr Zielinski put them in front after three minutes.

But Angel Montoro levelled for Granada and although Fabian Ruiz struck again for the hosts on the hour, Granada held on for a 3-2 aggregate win to prolong their impressive European debut.

Granada’s La Liga rivals Villarreal also made it through with a 2-1 defeat of Salzburg for a 4-1 aggregate win.

Shakhtar Donetsk completed a 3-0 aggregate victory over Maccabi Tel Aviv while Norwegians Molde caused a surprise by winning 2-0 in Hoffenheim to wrap up a 5-3 aggregate triumph.