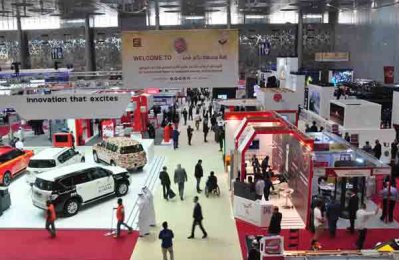 Milipol Qatar 2021, the 13th international event for Homeland Security and Civil Defence in the Middle East which will run at the Doha Exhibition and Convention Centre (DECC) from March 15 to 17, has attracted a multi-national exhibitor line-up representing 14 nations across the Middle East, South America, Europe, the UK, USA, Sub-continent, and Scandinavia.
The show, one of the first in the region this year to focus on homeland security and civil defence, is being held under the patronage of His Highness the Emir of Qatar, Sheikh Tamim Bin Hamad Al-Thani and under the authority of Qatar’s Prime Minister and Minister of Interior, Sheikh Khalid bin Khalifa bin Abdulaziz Al Thani. It will feature five national pavilions representing Brazil, France, Germany, the UK and the USA.
Organisers, Qatar’s Ministry of Interior in partnership with Paris-based international event organiser Comexposium acting on behalf of the GIE Milipol headed by Civipol, the technical implementer of the French ministry of the Interior, say 68% of the companies registered for the biennial show is new to Milipol Qatar having been attracted by strong forecasted sector growth.
“The value of the Middle East homeland security market has been predicted by Frost and Sullivan to grow to $19.7bn by 2022,” explained Préfet Yann Jounot CEO of Civipol and President of Milipol events. “This has fuelled great interest in the event and expanded its exhibitor outreach across the entire homeland security and civil defence spectrum including the growth areas of data, perimeter and private security as well as systems integration.”
France will mount the largest of the national pavilions which will be supported by the French minister of the Interior. The pavilion organiser, the Paris Region Chamber of Commerce and Industry, said 77% of the 22 partner exhibitors will be new to Milipol Qatar with all being “major players in their fields with research and development units to present innovation for export. Among the pavilion exhibitors is the Nexter Group, a defence and security robotics solutions provider which is planning to promote its NERVA multi-mission robots. “We are eager to help the Qatari, and more generally Middle Eastern, police special units and military special forces improve their safety through high-end reconnaissance and explosive ordinance disposal robotics capabilities,” commented Romain Le Berre, the Group’s Sales Director.
French hi-tech solutions provider the CS GROUP says it will bring its most advanced defence and security innovations to the show including its Crimson hypervisor software and the Boreades C-UAV system; Tactical Data Link for homeland operations and high value training powered by simulation.
Though Milipol Qatar 2021 has a wealth of show newcomers, it has also attracted loyal support from regular exhibitors, including the German pavilion. Its organiser CCO Creative Consulting GmbH said Milipol Qatar has been the most important homeland security show for German companies in terms of creating business and establishing contacts with the Qatari government for over two decades.
“The whole Middle Eastern market continues to be in demand of cutting-edge technological applications and systems from all over the world to effectively counter terrorism attacks and provide safety for its citizens and critical infrastructure, said the company’s Managing Director Nico Baumbach.
Meanwhile, the UK Defence and Security Organisation, which is organising the British pavilion says Milipol Qatar is now a global leader for defence and security procurement with UK providers eyeing potential partnership agreements with local Qatari players.
“UK defence and security products have an outstanding reputation in Qatar and are already widely deployed within the security sector. UK companies are keen to develop industrial partnerships and joint ventures with Qatari companies and Qatari buyers are always keen to have visibility on the latest UK products and innovations,” said an organisation spokesperson.
Milipol Qatar 2021 will also feature a series of highly informative seminars featuring dialogues, case studies and debates focussed on the future of the homeland security and civil defence industries and the way towards a safer world. The seminar programme will feature international thought leaders who will explore cyber security and cyberthreats, civil defence and large events security management.
“The global industry will be keenly watching the outcome of these seminars as they will send insightful signals on the future of these important industries which will help ensure a safer world for all,” added Préfet Yann Jounot.
Milipol Qatar 2021 will take place under the governance of strict health and safety protocols designed to combat the spread of COVID 19. Online registration for industry professional visitors who gain free entry, is open on www.milipolqatar.com.--TradeArabia News Service