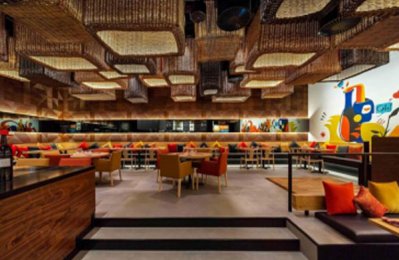 Studio N, an architectural lighting design consultancy based in Dubai that delivers creative, simple lighting solutions to the interior, architecture and landscape sectors, said it has completed three projects in the Middle East; each of them in a different sector.
The company readied low-glare downlight systems for SensAsia, a spa within the Kempinski Hotel at Mall of the Emirates in Dubai (UAE), a modern lighting system for fashion retailer Moda by Nayomi in Jeddah (Saudi Arabia) and a practical lighting solution for Salero Bahrain, a vibrant Spanish restaurant located in The Westin Hotel in the kingdom.
All three projects are fundamentally different but a sense of drama and ambience is skilfully created in each space using clever lighting techniques, said the Dubai lighting design company.
Speaking on its SensAsia Spa project, Studio N dubbed it as one of the world’s most beautiful spaces for relaxation and pampering.
Working with Pallavi Dean’s interior design agency Roar, and contractors Bond Interiors, Studio N employed low-glare downlight systems to generate mood-enhancing lighting effects across the various elegant spaces.
Smaller lighting elements in shelving and decorative fixtures create a layer of accent light that conjure up an atmospheric yet practical environment, said the Dubai company.
Organised around a central courtyard, punctuated by contemporary interpretations of traditional Asian arch structures, SensAsia comprises eight treatment rooms, one couples’ suite offering total privacy, a wet treatment space ‘hammam’, separate male and female changing rooms and therapeutic relaxation areas, complete with heated beds.
Bespoke facilities include experience showers, an ice fountain, herb saunas, steam rooms, a Jacuzzi and virtual reality headsets, which can be incorporated into treatments to offer complete, customised escapism and guided meditations.
With no natural light at all in the space, Studio N designed a scheme where light is used as a healing, transformative element.
The lighting design creates a perfect balance between light as a dramatic force for good (as seen in the handsome arches in the reception area) and light as a vehicle that allows other elements, such as water, to take centre stage, it added.
On the Moda by Nayomi project, Studio N said it had developed a modern lighting system for the fashion retailer, working in close co-ordination with Umdasch and product supplier Ansorg.
The design concept captures the modern Saudi city scene and an efficient high-output LED tracklighting system was used to accentuate the choice of materials in the contemporary interior, it stated.
"Narrow spot beam reflectors focus the light directly on the merchandise, and avoid any unnecessary spill-light, ensuring good glare suppression and a high level of visual comfort. The Studio N team wanted all eyes on the stars of the show: the clothes,"said a company spokesman.
Concealed linear LED strip lights are used within coves as part of a central ceiling focal point creating visual interest and adding another indirect layer of light ensuring customers feel good in the space, he noted.
On the Salero Bahrain project, Studio N said it is a renowned restaurant where diners experience classic dishes from the open kitchen while enjoying live entertainment. Performance is in the DNA of the dining experience here.
Studio N said for this project it had worked with designers LXA to implement an atmospheric and practical lighting solution throughout the space.
"Large illuminated rattan baskets were used as ceiling light shades that hover above the restaurant to form one of the many eye-catching, dramatic features. To achieve the subtle floating effect and wash of ambient lighting, linear LED flex strips were carefully concealed within the internal edge of each basket,"said the spokesman.
"Track lighting is suspended from the exposed ceiling, between the decorative rattan baskets. Each light has a high-quality LED source with a high colour rendering index (CRI) to ensure that the dishes and colourful interior details look their best," he added.
According to him, narrow beam angles provide direct functional lighting onto the dining tables and avoid unnecessary light spill and glare. By using concealed linear wall grazers, a wash of illumination dramatically sweeps across the surfaces, along with a play of light and shadow.
"A lighting control system allows staff to modify the ambience of the restaurant space at a touch of a button. Much like a theatrical stage, individual luminaires are used to illuminate different lighting scenes," he added.-TradeArabia News Service