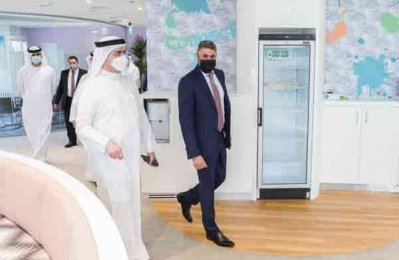 VMware Middle East
Saeed Mohammed Al Tayer, MD & CEO of Dubai Electricity and Water Authority (Dewa), has inaugurated the newly expanded regional HQ of VMware Middle East, highlighting the role of digital technologies in developing innovative services in the UAE and the entire region.
VMware Middle East has expanded its regional HQ in Dubai Internet City to support growth in the Middle East, Turkey, and North Africa and further increase its support for public and private sector customers on their cloud and app modernisation journeys.
“Moro Hub, a subsidiary of Digital Dewa, the digital arm of Dubai Electricity and Water Authority (Dewa), works to achieve the vision and the directives of HH Sheikh Mohammed bin Rashid Al Maktoum, Vice President and Prime Minister of the UAE and Ruler of Dubai, aiming at strengthening the leading position of the UAE and Dubai in the digital and smart solutions sector in the world. As a leading data hub, our key goal is to build strategic partnerships with multinational technology providers like VMware,” said Al Tayer.
“The newly expanded regional VMware HQ in Dubai comes as a result of this partnership, and reflects our keenness to streamline access to data, championing digital transformation, diversified economic growth, and embracing innovation agendas in alignment with Dubai 10X initiative and UAE Centennial 2071 that aims to make the UAE a global hub of advanced digital solutions. Today, partnerships among organisations sharing common goals are more important than ever, as they play a crucial role in supporting digital transformation at the organisational and national levels,” Al Tayer added
Since opening its first regional office in Dubai in 2012, VMware has developed its Middle East operation from an entity with 26 employees to a regional hub with 480 staff committed to helping organisations in the UAE and beyond achieve their transformation goals by enabling unprecedented flexibility in how they build and evolve their digital environments and serve customers.
“With our new office expansion, VMware Middle East is better positioned to collaborate even more closely with a growing number of customers on ambitious transformation projects in the UAE and across the region,” said Ahmed Auda, Managing Director, VMware Middle East, Turkey, and North Africa.
“The collaboration between Moro Hub and VMware under the umbrella of Digital Dewa is amongst the most innovative projects VMware is working on across our 500,000+ customers worldwide,” Auda said. ”Dewa has demonstrated global best practices in digital transformation. It has re-defined and re-imagined the role of public utilities as a pillar of the digital economy. With the launch of Digital Dewa, it creates the world’s first digital utility utilising autonomous systems for renewable energy, storage, expansion in AI adoption, and providing digital services,” added Auda.
VMware works with Dubai Electricity and Water Authority (Dewa), a pioneer of digital initiatives to boost its operations and customer services, and with Moro Hub, a Dubai-based cloud service provider that offers cloud and hosting services to Government and Enterprise customers in the UAE.
VMware collaborates with major customers in the UAE in sectors including government, healthcare, and finance, to transform the way they operate by embracing a cloud-first approach and modern apps aligned with the country’s national strategies.
In October 2020, Moro Hub launched the Middle East’s first certified Tier-III Green Data Centre, which is fully powered by solar energy and runs on VMware cloud technologies. VMware Middle East is proud to support the project, which is in unison with its 2030 Agenda’s sustainability goals of decarbonising the world’s digital infrastructure across its customer ecosystem, value chain and own operations. VMware has taken an early lead on sustainability and became a carbon neutral organisation in November 2018.
The expansion of VMware’s Dubai office also demonstrates the growing importance of the UAE to VMware and as a regional hub. The country is moving ahead with ambitious 2030 targets to diversify its economy, digitise government services, and boost sustainability. -- Tradearabia News Service