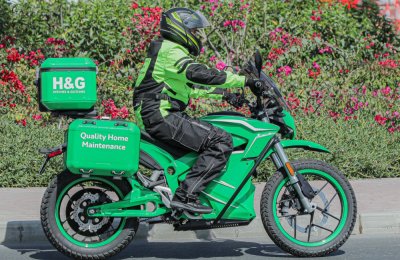 Dubai-based smart and green maintenance specialist Hitches & Glitches (H&G), part of the Farnek Group, has added its first electric motorbike to the company’s home maintenance fleet.
The motorbike will support its environmental goals and help ascertain how much more cost-effective and efficient they are compared to their conventional saloon cars.
On the new move, Director Kelvin Vargheese said: "Electric motorbikes are a cost-effective and efficient way of supporting our residential customers. There is no petrol to buy, and with no oil, there are fewer moving parts meaning servicing costs are lower."
"With top speeds of up to 130 kmh, these motorbikes can cover considerable distances in less time than an average saloon car, especially when navigating their way through congested roads during peak hour traffic. This offers our customers quicker call out times in general, rapid response to emergencies and potentially more call-outs per day, all without increasing air pollution," he stated.
According to research, the current value of the global electric motorcycle and scooter market is growing at more than 7% per annum and will be worth over $14 billion, within the next six years.
That forecast has undoubtedly been accelerated by the pandemic, as the demand in major cities around the world for last-mile deliveries has grown exponentially.
"Indeed, the reason that we originally wanted to go electric was the fact that we could save approximately 14 metric tonnes of carbon emissions, per e-motorbike over a 12-month, period assuming total travel of around 90,000km. In addition, there is virtually no noise pollution compared with conventional motorbikes," remarked Vargheese.
With an ever-present eye on efficiency and sustainability, H&G has taken the concept of the e-Cargo bikes one stage further and adapted it to their business model, he stated.
H&G chose the Zero DSR – Black Forest model, made in Santa Cruz, California, which has an urban range of 250km before recharging its lithium-ion battery, which takes just two hours at a level 2 charge station.
Fortunately, as parent company Farnek already has an electric car, H&G has access to a charger at its Dubai HQ. Alternatively, it can be charged overnight in any 120-volt, household electrical socket, said Vargheese.
H&G currently employs over 1,000 employees and services more than 5,000 customers throughout the UAE.-TradeArabia News Service