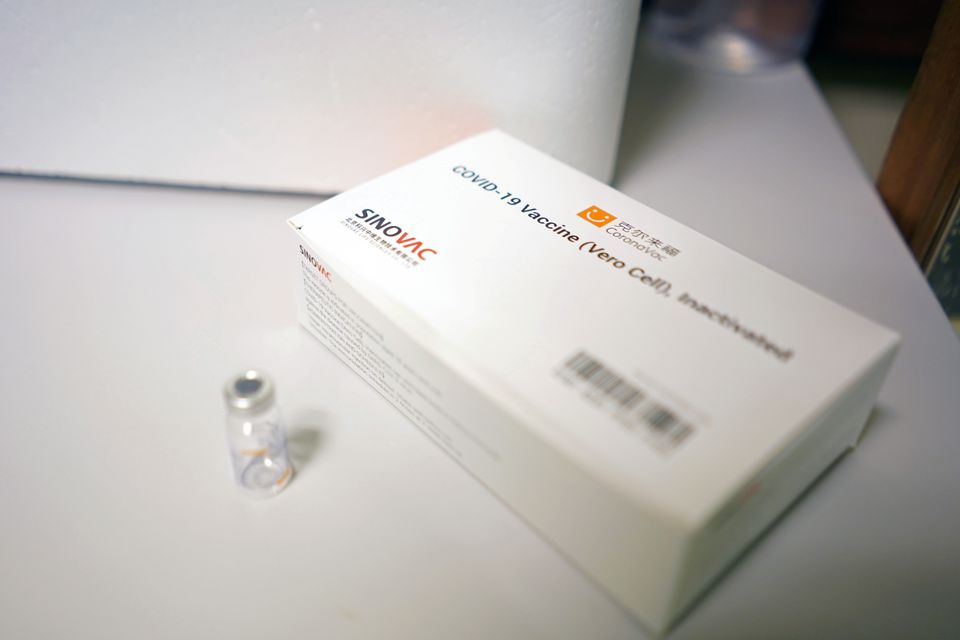 A box with China's SINOVAC vaccines against the coronavirus disease (Covid-19) is seen during the first stage of the vaccination plan, which aims to inoculate teachers, military personnel, firefighters and police officers, among other non medical essential workers, at a vaccination center in Antel Arena, Montevideo, Uruguay March 1, 2021. (Reuters Photo)

The Covid-19 vaccine developed by China's Sinovac Biotech (SVA.O) has an efficacy of 83.5% based on final results of Phase III trials, Turkish researchers said on Wednesday, a downward revision from a preliminary finding of 91.25%.

The final efficacy rate was based on 41 infections, 32 of which had received a placebo, said Murat Akova, head of the Phase III trials conducted in Turkey.

The rate is based on participants who presented at least one symptom of Covid-19 along with a positive PCR test at least 14 days after the second dose of the vaccine, Akova said.

He added that the vaccine prevented hospitalisation and severe illness in 100% of cases, saying the six people who were hospitalised were all in the placebo group.

"Because there were no important side effects (in the trial)... let alone the fact that this vaccine is being used widely in our country and no side effect was reported, we can say comfortably that it is safe," said Serhat Unal, member of the government's advisory Science Council.

Turkey had announced a preliminary result with 29 infections in December, which placed the efficacy at 91.25%. Worldwide trials of the shot, called CoronaVac, have shown wide variations in efficacy rates, leading to some criticism. read more

The final results in Turkey were based on a 10,216 participants, 6,648 of whom received the vaccine as part of the Phase III study that began mid-September, said Unal.

Males made up 58% of participants, who were all between the ages of 18 and 59, Unal said, adding that the two doses were delivered 14 days apart, compared to 28 days in the nationwide rollout.

Turkey has already administered 9.32 million doses of CoronaVac across the country in a campaign which began in mid-January. More than 2 million people have received two doses.