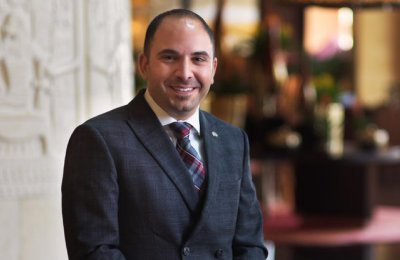 Accor has announced the appointment of Afif Salibi as General Manager of Raffles Dubai.
Formerly with Fairmont Royal Palm Marrakech, within the Accor portfolio, Salibi will lead the strategic direction and manage the operations of the group’s legendary property in Dubai.
Canadian and Lebanese national, Salibi is no stranger to Accor and the Raffles brand, having been with the group since 2007, bringing over 20 years of international hospitality experience to this role. Starting out in Food & Beverage at Le Richemond in Geneva, Switzerland and later in Athens, Greece, he then moved to rooms division operations at the Grand Hyatt Atlanta, US. By 2006, he was the Front Office Supervisor at the Grand Hyatt in Dubai and a year later, he moved to Lebanon as Assistant Food & Beverage Manager at Le Royal Beirut.
In mid-2007, Salibi moved back to Dubai as part of the pre-opening team of Raffles Dubai as Assistant Front Office Manager and was later promoted to Front Office Manager. In 2010, he was part of the task force recruitment for the opening of the Fairmont, Raffles and Swissôtel complex in Makkah, Saudi Arabia. He then moved to Cambodia as Director of Rooms at the Raffles Hotel Le Royal, Phnom Penh and later moved to Edmonton, Canada as Director of Operations at the Fairmont Hotel Macdonald. He returned to Raffles Dubai as Director of Operations for almost three years before moving to Fairmont Royal Palm Marrakech in 2017 as General Manager where he spearheaded the rebranding and repositioning of this flagship luxury resort.
Having grown with Raffles Dubai and seen it evolve for the past 14 years, Salibi is passionate about the hotel and looks forward once again to lead an exceptional team and Raffles’ legacy. Known for its unparalleled guest experience, the property continues to be positioned at number one out of 761 hotels in Dubai for the past six years and was awarded amongst the top 10 hotels worldwide on TripAdvisor in 2020.
Salibi holds a Bachelor’s degree in Hospitality Business Management from Washington State University and a Diploma in Hotel Management from César Ritz Colleges in Switzerland. - TradeArabia News Service