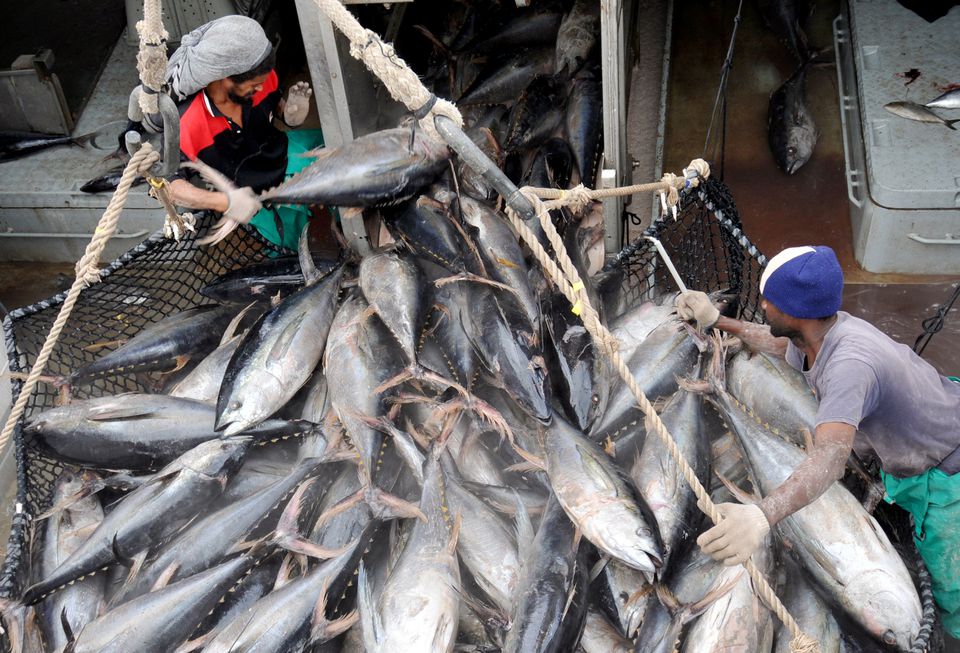 Representatives of 30 nations meet on Tuesday to seek ways to save fast-depleting tuna stocks in the Indian Ocean as demand in Asia and the West soars for sushi and tinned fish.

Environmentalists say the warm water species is at risk of depletion as over-fishing compounds other threats from climate change and pollution.

There is corporate concern too: British supermarkets Tesco and Co-op and Belgian retailer Colruyt pledged last year to stop buying Indian Ocean yellowfin unless the U.N.-mandated commission adopts a plan to rebuild stocks.

The International Union for Conservation of Nature has for nearly a decade had the species on its "Red List".

Yet the total global catch has risen by about a third, to nearly 450,000 metric tons annually, according to the London-based Blue Marine Foundation advocacy group.

It estimates yellowfin tuna stocks could "collapse" - meaning they would go beyond the minimum size needed for recovery - within the next five years if the catch is not cut.

French and Spanish fishing fleets take the majority of fish, using industrial methods such as "purse seine" with huge nets that often net juvenile yellowfin yet to begin reproducing.

'DELAY COULD BE CATASTROPHIC'

Kenya and Sri Lanka, for example, want more curbs on devices such as fish aggregators: floating objects that attract tuna and other species towards nets.

"They are the visitors," said Will McCallum, Head of Oceans at environmental group Greenpeace UK, of the European fleets. "They are fishing at a far larger capacity than anybody else, and it's not an equitable state of affairs."

The Maldives wants the yellowfin catch to be cut by 15% from 2015 levels, when IOTC scientists first agreed they were being overfished.

The IOTC had last year recommended cutting the catch by 20% from 2014 levels, but rowed back in January, saying that was distorted by projections from the 2018 stock assessment.

Given that a new stock assessment will not be ready until the end of 2021, the commission may postpone new measures, according to the Blue Marine Foundation.

"For a stock that is at risk of collapse, this delay could prove catastrophic," it said in a statement.

Demand for yellowfin is booming as its light meat is widely used for tinned fish and in sushi in North America, Europe and Asia. The global yellowfin market in 2018 was worth $15.8 billion, the second-highest value of the seven tuna species, according to a report by the world's largest canned tuna company, Thai Union Group PCL (TU.BK).

Greenpeace's McCallum said the over-fishing issue had stalled during the COVID-19 pandemic and drastic action was needed now to avoid irrecoverable damage to the species.