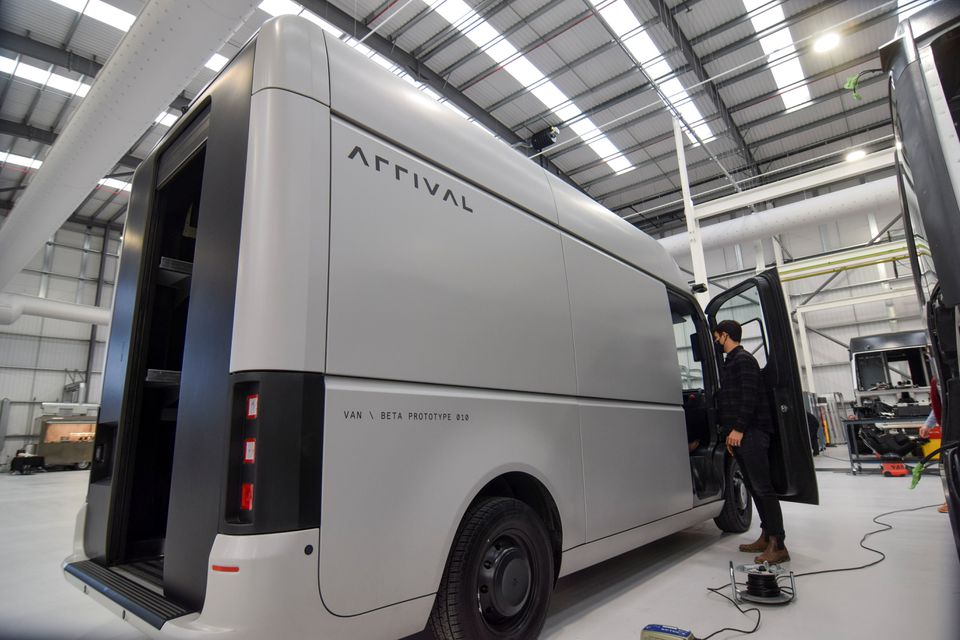 A man stands next to a fully-electric test van, due to go into production in 2022, built by electric van and bus maker Arrival Ltd, that has seen a spike in interest due to soaring e-commerce amid the coronavirus disease (COVID-19) pandemic and looming fossil-fuel vehicle bans, in Banbury, Britain, February 23, 2021. Reuters Photo

Electric van and bus maker Arrival is wrestling with the global pandemic like other UK firms, but not because of a lack of business.

Arrival is fielding four to five times the number of queries from potential customers compared with a year ago as soaring e-commerce during the pandemic and changing emissions regulations have fueled demand, said president Avinash Rugoobur.

"Worldwide, the mindset has shifted and people understand the future is electric," said Rugoobur. "So now it's a question of how do we get there?"

At Arrival's R&D centre in Banbury, northwest of London, executives from a major British retail group patiently waited to tour the startup's test van, due to start production in 2022.

A spike in interest in Arrival followed Britain's call in November for a ban on new fossil-fuel vehicles by 2030, and was further helped by new U.S. President Joe Biden's stated interest in electrification.

Tightening CO2 emissions targets in Europe and China have combined with improving battery technology to provide greater range at lower costs, giving commercial electric vehicles (EVs) their moment in the sun after years of waiting.

"People talk about a tipping point for commercial EVs, but I think we're already there," said Luke Wake, vice president of maintenance and engineering at United Parcel Service Inc, which has ordered up to 10,000 vans from Arrival and owns a stake in the startup.

Feverish investor interest in finding the next Tesla Inc and bringing them to market via special-purpose acquisition companies has included commercial EV startups like Canoo Inc and Arrival, which will go public later this month via a merger with CIIG Merger Corp.

Also, the coronavirus pandemic has boosted the need for vans to deliver goods to consumers at home.

Startups like Rivian, Volta Trucks and traditional manufacturers Daimler AG, Ford Motor Co and General Motors Co have models out or in the works. Rivian will begin making vans for Amazon.com Inc later this year.

As batteries are still expensive, commercial EVs have a higher sticker price than diesel or petrol equivalents - a hard sell for many cost-conscious companies.

But thanks to lightweight materials and tailoring battery packs to customers' range needs, Arrival's Rugoobur said that is about to change - at some ranges its vans will cost less than a diesel equivalent.

"If Arrival can manufacture those vehicles at the equivalent price of a diesel van, the total cost of ownership is so heavily in their favour it becomes a competitive advantage," said David Wyatt, an analyst at research firm IDTechEx.

'IT'S GOING TO HAPPEN FAST'

"If you look at logistics operators, they're in the middle and under pressure from all sides," he said.

Stockholm-based Volta Trucks, which also operates in the UK, is developing a 16-tonne electric truck, due for production in 2022, for urban freight distribution routes. Batteries are heavy, so the Volta Zero's body is made of a light hemp-based composite and its shorter inner-city routes require fewer battery cells.

Volta Trucks has an order book of $260 million and its biggest public order to date is for 1,000 trucks from French refrigerated truck firm Petit Forestier.

But Simon Webber, a portfolio manager at Schroders, which has about $650 billion in assets under management, said more EVs coming to market and falling battery costs will change that.

"It's going to happen fast," Webber said. "Because the average life of those vehicles is lower, they turn over faster than passenger vehicles, they will electrify faster."

Leading energy consultancy Wood Mackenzie said the commercial EV market will mushroom from a low base today to global sales of 3 million units by 2025 and 9 million by 2030, led by buses and light trucks.

Based on conversations with manufacturers, "we see commercial electric vehicles coming in a big, big way," said Tom Jensen, CEO of battery maker FREYR, which is going public via a merger with a SPAC, Alussa Energy Acquisition Corp.

EV makers say while commercial EVs have a higher sticker price, over their lifetime their "total cost of ownership" is lower as electricity is cheaper than diesel and electric motors require less frequent repairs due to having fewer moving parts.

The UK arm of package delivery firm DPD, a unit of France's La Poste (LAPST.UL), was an early adopter and its 732 EVs account for nearly 10% of its fleet - most of them e-NV200 vans from Nissan Motor Co Ltd (7201.T) or eTGE vans from Volkswagen AG (VOWG_p.DE) unit MAN.

In 2020, the pandemic drove DPD's volumes to a daily record of 2 million packages during the holiday peak season and the company will buy 500 more electric trucks in 2021.

"It's still more expensive, but the gap is closing," said Craughan. "If you can run them longer than diesel vehicles that's where you’re going to make more of a return."

DPD will test a Volta Zero later this year and has talked regularly with Arrival, Craughan said.

By 2025, battery prices are expected to fall enough to give EVs price-parity with fossil-fuel vehicles.

But Arrival's Rugoobur said some of the startup's production models will already beat diesels on price - aided by a tough, light thermoplastic composite body that offsets heavy batteries - and includes basic self-driving features to cut down on costly accidents at package depots.

"If we can get that price point down to an acceptable level where you can scale it, it allows us to make bigger commitments like the one with Arrival," UPS's Wake said.