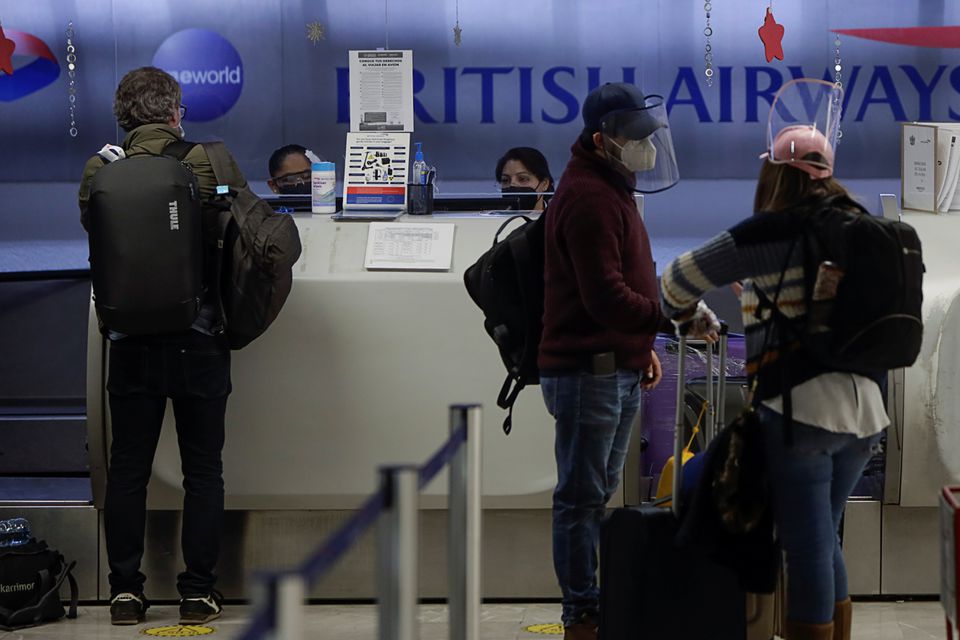 FILE IMAGE: Passengers are seen at the counter of British Airways to check in for their flights to London at the Benito Juarez International Airport, in Mexico City, Mexico December 21, 2020. (Reuters Photo)

British Airways's new boss said vaccinated people should be allowed to travel without restriction and non-vaccinated people with a negative COVID-19 test, as he set out his ideas for a travel restart a month before the UK government finalises its plans.

Holidays will not be allowed until May 17 at the earliest, the government has said, but before that, on April 12, Britain will announce how and when non-essential travel into and out of the country can resume.

Sean Doyle, appointed BA's chief executive last October, called on Britain to work with other governments to allow vaccines and health apps to open up travel, after a year when minimal flying has left many airlines on life support.

Doyle said the roll-out of vaccines made him optimistic BA would be back flying this summer, but added the recovery depends on what is said on April 12.

He wants government to give its backing to health apps that can be used to verify a person's negative COVID-19 test results and vaccination status.

Apps will be key to facilitating travel at scale, the industry has said. Airline staff checking paperwork takes 20 minutes per passenger and is not practical if large numbers of passengers return. read more

Britain has rapidly rolled out vaccinations and 44% of the adult population, mostly people over 60, have now had their first shot.

The government has said any return to travel must be fair and not unduly disadvantage those who have not been vaccinated. read more

Doyle expects Britain to bring in a tiered framework with destinations put into categories depending on risk, and that will determine BA's summer schedule.

Beyond saying there was "huge pent up demand", Doyle declined to forecast how strong the season could be.

Budget rival Ryanair (RYA.I), Europe's biggest airline, has said it hopes to fly up to 70% of 2019 passenger numbers this summer. read more

BA has struck a deal with a testing kit provider giving its passengers 33 pound ($46) tests to take abroad. read more

But he said BA was also looking further afield.

"We're already looking at new destinations over the summer that we haven't flown to before, and that could be across both long haul and short haul," Doyle said.