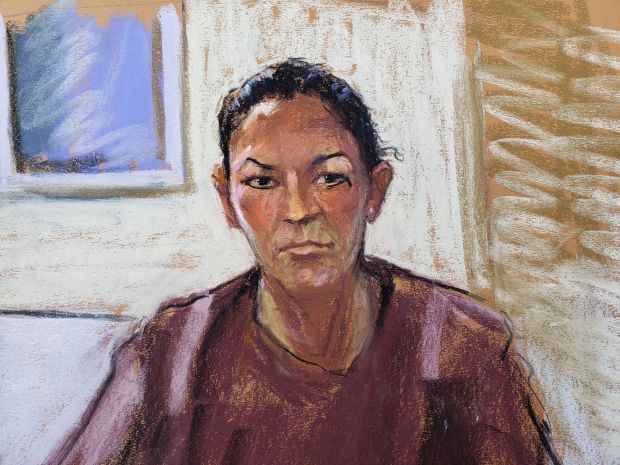 FILE IMAGE: Ghislaine Maxwell appears via video link during her arraignment hearing where she was denied bail for her role aiding Jeffrey Epstein to recruit and eventually abuse of minor girls, in Manhattan Federal Court, in the Manhattan borough of New York City, New York, U.S. July 14, 2020 in this courtroom sketch. Reuters Photo

New York: A US judge on Monday rejected Ghislaine Maxwell's third request for bail, after the British socialite had offered to renounce her British and French citizenships if she were freed.

US District Judge Alison Nathan in Manhattan said Maxwell remained a "significant risk of flight" and that no conditions, including her proposed $28.5 million bail package, would reasonably assure she would show up in court.

Maxwell, 59, has pleaded not guilty to charges she helped the financier Jeffrey Epstein recruit and groom three teenage girls for sex between 1994 and 1997, and lied about her role.

She has been held in a Brooklyn jail since her arrest last July, which came 11 months after Epstein died in his Manhattan jail cell while awaiting trial on sex trafficking charges.

Lawyers for Maxwell did not immediately respond to requests for comment.

After Nathan rejected two prior bail requests, Maxwell on Feb. 23 offered to renounce her non-U.S. citizenships, and move most of her and her husband's assets into an account to be monitored by a retired federal judge.

Her lawyers said Maxwell wanted to defend herself at trial, and the new conditions should assuage concern she might seek a "safe haven" in the United Kingdom or France.

But the judge said Maxwell could still resist extradition if she fled, and even with the monitor still had access to "sufficient" assets to help her evade prosecution.

Nathan is also considering 12 motions by Maxwell to dismiss, narrow or weaken the government's criminal case.

Maxwell has said the government targeted her only because Epstein killed himself and prosecutors wanted someone else to blame, and that she was covered by Epstein's own 2008 non-prosecution agreement with federal prosecutors in Florida.