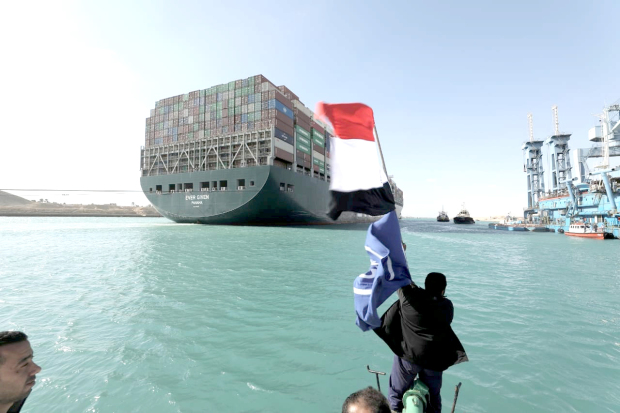 A man waves an Egyptian flag as ship Ever Given, one of the world's largest container ships, is seen after it was fully floated in Suez Canal, Egypt March 29, 2021. Suez Canal Authority/Handout via REUTERS ATTENTION EDITORS - THIS IMAGE WAS PROVIDED BY A THIRD PARTY. NO RESALES. NO ARCHIVES

ISMAILIA: Shipping was on the move again late on Monday in Egypt’s Suez Canal after a giant container ship which had been blocking the busy waterway for almost a week was refloated, with more than 400 ships waiting to pass through.

After the 400-metre-long Ever Given was dislodged, 113 ships were expected to transit the canal in both directions by early morning, Suez Canal Authority (SCA) chairman Osama Rabie said. He said 422 vessels were waiting in line.

The Ever Given had become jammed diagonally across a southern section of the canal, the shortest shipping route between Europe and Asia, in high winds early on March 23.

“The ship came out intact and it has no problems. We’ve just searched the bottom and soil of the Suez Canal and thankfully it is sound and has no issues, and ships will pass through it today,” Rabie earlier told Nile TV.

At dawn yesterday, rescue workers from the SCA working with a team from Dutch firm Smit Salvage partially refloated the ship and straightened it in the canal. After several hours it shifted briefly back across the canal before being manoeuvred free by tugs as the tide changed, a canal source said.

“The time pressure to complete this operation was evident and unprecedented,” said Peter Berdowski, CEO of Smit Salvage owner Boskalis, after the Ever Given was refloated.

Bahrain yesterday commended the remarkable achievement of Egypt to end the crisis in the Suez Canal.

The Foreign Ministry lauded the efforts of various salvage teams and their efficiency to restore the international maritime traffic in the canal.