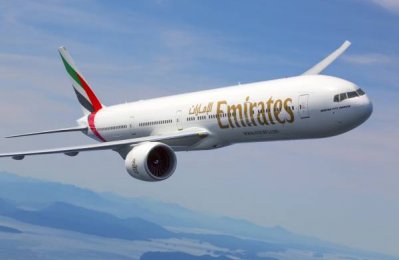 Emirates has announced it will resume its direct service between Milan Malpensa and New York John F Kennedy International Airport from June 1, re-opening year round connectivity between Europe and the US.
The Milan-New York JFK flight will be an extension to Emirates’ existing flights to Milan EK205, operated by the Boeing 777-300 ER, offering eight seats in First Class, 42 lie-flat seats in Business and 304 ergonomically designed seats in Economy class. The airline’s service to and from New York JFK will increase to three times daily to support the newly resumed link, facilitating trade and tourism while providing customers worldwide with more connectivity, convenience and choice.
Emirates flight EK205 will depart Dubai (DXB) at 09:45hrs, arriving in Milan (MXP) at 14:20hrs before departing again at 16:10hrs and arriving into New York John F Kennedy International Airport (JFK) at 19:00hrs the same day. The return flight EK206 will depart JFK at 22:20 hrs, arriving in Milan at 12:15hrs the next day. EK206 will depart once again from Milan the next day at 14:05hrs bound for Dubai where it will arrive at 22:10 hrs (all times are local).
Emirates has recently reaffirmed its commitment to the US with the resumption of services to 11 gateways (including Orlando and Newark in June). The resumed service between Dubai-Milan-JFK will offer more choice to travellers heading from Europe, the Middle East, West Asia, and Africa via Dubai or Milan as well as give seamless access to other US cities beyond New York via the airline’s codeshare agreement with Jetblue.
The airline has safely and gradually restarted operations across its network. Since it safely resumed tourism activity in July, Dubai remains one of the world’s most popular holiday destinations, especially during the winter season. The city is open for international business and leisure visitors. From sun-soaked beaches and heritage activities to world class hospitality and leisure facilities, Dubai offers a variety of world-class experiences. It was one of the world's first cities to obtain Safe Travels stamp from the World Travel and Tourism Council (WTTC) – which endorses Dubai's comprehensive and effective measures to ensure guest health and safety.
Customers are encouraged to check the latest government travel restrictions in their country of origin and ensure they meet the travel requirements of their final destination. - TradeArabia News Service