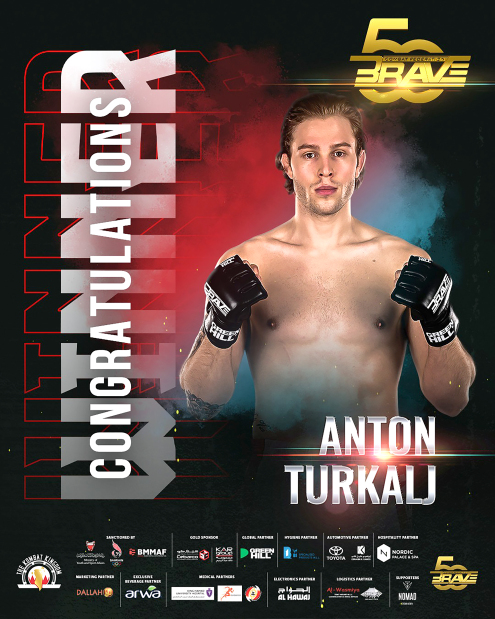 Sweden’s Anton Turlkalj is the real deal. The knockout artist completely obliterated Konstantin Soldatov and got a 13-second knockout with a brutal spinning back fist.

The quick night at the office for Turkalj earned him the record of fastest KO in the history of BRAVE Combat Federation. After the impressive win, Turkalj showed his usual swag in the post-fight interview.

“I am the biggest name in the Light Heavyweight division… Nay, in the whole BRAVE CF. They should make a belt for me because I’m the best fighter and also the prettiest. I won’t leave any message to whoever wins the belt because they have to chase me,” he said.

Meanwhile, Mohammad Fakhreddine’s dream of becoming a two-weight champion will have to wait, as the current Middleweight champion has been forced off his Light Heavyweight title shot due to illness.

Fakhreddine was scheduled to face off against fellow top contender Mohammed Said Maalem for the vacant crown at 205-pounds, but the much-anticipated duel of two of the top Light Heavyweights in the world will have to wait.

Fakhreddine wasn’t feeling well as he made it backstage in the Arad Fort, and after consultation with the on-site doctors, the bout against Said Maalem was scrapped off the historic BRAVE CF 50.

The organisation’s legendary fight card will continue on and the co-headliner is now the last quarter-final of the biggest Flyweight tournament in mixed martial arts history, with Ali Bagautinov looking to move to the semifinals as he welcomes top 125-pounder Dustin Ortiz.

Ahead of the historic event, the promotion released Road to BRAVE CF 50, a documentary which details the hardships encountered by the top fighters involved in the main event, as well as the paths they have taken to be a part of a momentous occasion for mixed martial arts.

From growing up in war-torn countries to dealing with tragedy in their home countries, the athletes have endured what many couldn’t and have come out at the top.

Road to BRAVE CF 50 takes an intimate look at the preparations of Jarrah Al Silawi, Ismail Naurdiev, Mohammad Fakhreddine and Mohammed Said Maalem, for the biggest night of their careers, giving a glimpse of what it’s like to prepare for a fight night of this magnitude.