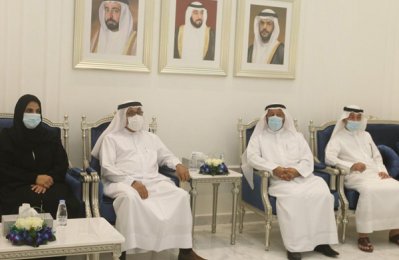 Officials at the meeting
The Sharjah Chamber of Commerce & Industry (SCCI) is committed to aligning its strategies with Sharjah Government’s plans to strengthen the emirate’s status as one of the most prominent business hubs in the world.
This is achieved by supporting the competitiveness of the companies operating in the emirate, attracting foreign investments to them, and expanding into external markets, SCCI officials told a  visiting delegation from the Sharjah Consultative Council (SCC) headed by Ali Mehd Al Suwaidi, Chairman of SCC.
The SCC visit aims to learn about the chamber’s constructive contributions made to supporting the sustainable economic development in the Emirate of Sharjah through the ideal utilisation of technical and human resources and the provision of all services and facilities to investors.
The delegation was received by Abdullah Sultan Al Owais, Chairman of the SCCI, and  Mohammed Ahmed Amin Al Awadi, Director General of the SCCI.
The SCC delegation also included Hanan Rashid Al Jarwan, Vice Chairman of SCC, Obaid Mohammad Al Qabid Al Tunaiji, Rapporteur of the Public Utilities Committee in the Council.
The SCC delegation at first toured the SCCI facilities and was briefed on the most important services provided including attestations, issuance of certificates of origin, electronic legal services, in addition to the most important publications of the Chamber’s library. The delegates also toured the permanent exhibition of local industrial products.
Both sides also held a meeting in the presence of Abdul Aziz Shattaf, SCCI Assistant Director General, Members Services Sector and Director of Sharjah Exports Development Centre, Ibrahim Rashid Al Jarwan, Director of Economic Relations and Marketing at the Chamber and Jamal Bouzengal, Director of the Media Department in the Chamber.
The meeting touched on the chamber’s role in creating a supportive and attractive environment to investors and the future plans for encouraging entrepreneurship in Sharjah by launching a set of programmes and initiatives aimed at building the professional capacities and creative skills of the youth.
Stressing the importance of the visit, Al Suwaidi said that the visit aims to get familiar with the SCCI’s activities and know about services tailored to support various sectors in the emirate through implementing quality commercial and industrial projects.
He reaffirmed that the SCC pays utmost attention to supporting the economic sector during its sessions and through its committees, plans and programmes being executed.
Al Suwaidi lauded the SCCI’s role being played to facilitate the ease of doing business for all companies, support the business community and bolster the emirate’s growth in accordance with the visions and directives of His Highness Sheikh Dr Sultan bin Mohammad Al Qasimi, Supreme Council Member and Ruler of Sharjah.
While welcoming the SCC delegation, Al Owais underlined that the meeting reflects the real implementation of the strategic partnership among all the concerned authorities in their quest to achieve the emirate’s sustainable economic development.
“Over the course of 50 years, the Sharjah Chamber has championed the interests of the business community and private sector, and we’ll continue to play the same role in representing, supporting, and protecting the interests of the business sector in the emirate,” Al Owais said in conclusion.
SUSTAINABLE BUSINESS
During the meeting, Mohammed Ahmed Amin Al Awadi gave a presentation on the most prominent achievements made by the SCCI in 2020 in the Members Services Sector, where the total number of new and renewed memberships reached 57,103, of which 4,320 new memberships and 2,128 free zone memberships, while the number of certificates of origin issued during the past year reached 71,961 certificates, while the value of exports and imports in the same year has amounted to AED21.5 billion ($5.85 billion). The same year also witnessed the achievement of 100% in the smart transformation of the SCCI services to meet the requirements of its members.
Al Awadi shed light on the SCCI’s important role in fostering the exports of the emirate through the Sharjah Exports Development Center and the launch of the “Sadder” (export) Fund, the first of its kind fund across the Emirate Sharjah for financing export operations that aims to increase the rate of exports, open new markets, expand the export map of the SEDC’s affiliates, provide liquidity to exporters, and reduce the risk ratio in export operations through credit insurance.
He also highlighted the efforts made by the Sharjah International Commercial Arbitration Centre (Tahkeem) in helping businessmen solve and settle their commercial disputes through the Centre, in addition to instilling a culture of employing and benefitting from arbitration to solve disputes.
Al Awadi pointed to the SCCI’s substantial role in supporting the business sectors in the emirate through the launch of various initiatives, most importantly the exceptional campaign “Sharjah Shopping Promotions”, beside the important role of the Sharjah Excellence Award in raising the bar of the companies.
At the end of the visit, the SCC delegation lauded the Chamber’s tremendous efforts being made to advance the economic work and the development methodology adopted by the Chamber across the emirate.-- Tradearabia News Service