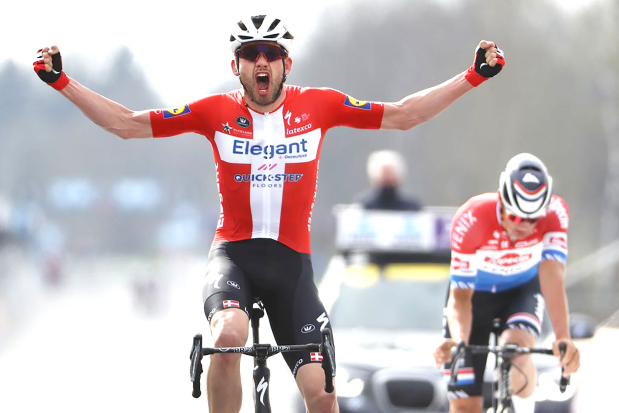 Deceuninck-Quickstep rider Asgreen pipped defending champion Van der Poel of the Netherlands in a two-man sprint finish after 254.3km between Antwerp and Oudenaarde.

“I felt good in the last two kilometres and I decided to trust my sprint. I left Mathieu in front and stayed in the wheel and decided when I wanted to go,” said Asgreen, the first Dane to win the race since Rolf Sorensen 24 years ago.

“It was a really, really hard race, we were both on the limit.”

The Tour of Flanders is the second of five Monuments, the major one-day races of the elite calendar.

Van der Poel hit a virtual wall in the final metres as he was leading the sprint, almost coming to a halt and shaking his head as Asgreen sped past.

Asgreen, one of six riders to break away from the main group with 37km left, attacked 26km from the line and was followed by Van der Poel and Belgian Wout van Aert (Jumbo-Visma) with the trio establishing a 20-second lead over a group that contained Julian Alaphilippe (Deceuninck-Quickstep), Marco Haller (Bahrain Victorious) and Anthony Turgis (Total Direct Energie).

Van der Poel then produced his trademark brutal attacks in the penultimate hill, dropping Van Aert and Asgreen, only for the Dane to come back on a flat section.

A faster sprinter, Van der Poel however was on an empty tank while Asgreen still had a bit of strength to add to his victory in the E3 Saxo Bank classic last month.

Earlier, Swiss Michael Schaer was disqualified for littering outside designated areas. The AG2R-Citroen rider was told to leave the race by stewards 107km from the finish after he disposed of a bottle where not permitted.