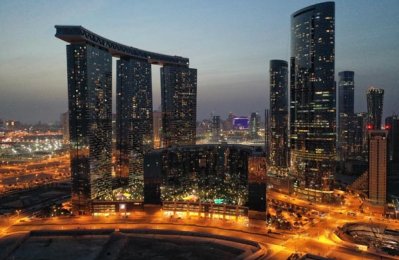 Houza, a Dubai-based property portal, is quickly making inroads into Abu Dhabi with the appointment of three new agencies based in the UAE capital - Gravity Real Estate, Nationwide Middle East Properties, PSI and Metropolitan Capital Real Estate - alongside its sister brand Metropolitan Premium Properties.
Dubbed as the 'UAE’s new home for buying, selling and renting,' Houza now boasts over 120 agencies in its network, listing around 40,000 properties in the UAE.
Having made a splash in Dubai when it launched in late 2020, the portal has now set its sights on the neighbouring emirate.
Houza said this strategic tieup with top Abu Dhabi firms will help the portal offer property seekers a wide range of villa and apartment options in popular Abu Dhabi communities, including Saadiyat Island, Al Reem Island, Al Reef, Al Raha Beach and Yas Island, to buy or rent.
Prospective buyers, sellers and renters in Abu Dhabi can also take advantage of the trends and transactions feature that houza rolled out across its site in January, it stated.
The revolutionary tool means that, for the first time, consumers have access to transaction data – specifically, the five most recent, genuine sales to have completed in the area on similar properties.
Chief Commercial Officer Matt Gregory said the addition of the Abu Dhabi agencies to the houza network is a big pull for visitors to the portal.
"Gravity Real Estate, Nationwide Middle East Properties, PSI and Metropolitan Capital Real Estate are all major players in the UAE property market, with whom we’re really pleased to have joined forces," he stated.
"Abu Dhabi as a living, working and travel destination is an important territory for us to offer on Houza. Not only is it renowned for its safe and clean communities for families, it is widely sought after by investors and short stay commuters who want to do business there," he added.
Gravity Real Estate Managing Director Munther Al Bakri said: "With one of the largest property portfolios in Abu Dhabi and working with developers such as Aldar, Bloom Properties and Imkan Properties, we wanted to make sure that we were reaching as wide an audience as possible. Houza offers us a new kind of consumer who is seeking transparency and convenience."
"We’ve already begun receiving leads through Houza so we’re looking forward to cementing our partnership with plenty of deals to come," he added.-TradeArabia News Service