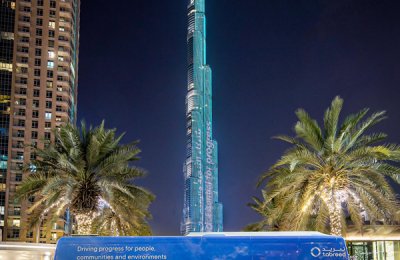 Tabreed
The National Central Cooling Company (Tabreed), headquartered in the UAE, has unveiled its all-new branding and corporate identity, ushering in an exciting new chapter in the story of one of the country’s most promising companies.
On Sunday April 11, the new company brand identity lit up the night sky in Downtown Dubai, during a spectacular lights and graphics show projected against the iconic Burj Khalifa. As the show drew to a conclusion, Tabreed’s previous branding dramatically morphed into the all-new identity.
This historic development followed Tabreed’s Annual General Assembly (AGA), which was held virtually on  March 21, confirming Tabreed’s stellar performance throughout 2020. The company exceeded all expectations by reporting a 16.5% increase in net income to a record AED550 million ($150 million) and the addition of 221,100 Refrigeration Tons (RT) of capacity growth, resulting in the delivery of more than 1.4 million RT of cooling capacity. One of Tabreed’s major success stories during 2020 was the acquisition of the world’s largest district cooling scheme in Downtown Dubai.
The assembly also saw the company’s shareholders approve a cash dividend of 5.75 fils per share and bonus shares of one share for every existing 45 shares for the financial year ending December 31, 2020.
This equates to approximately 11.5 fils for each share at the current share price, representing a 10% increase on 2019’s dividend. Despite its many challenges, 2020 had been a remarkable year for Tabreed and it remains well positioned to make significant progress in the near future.
Honed and refined over many months by leading industry professionals, Tabreed’s new corporate identity, built around “essential for progress” as a core brand positioning, is more closely aligned with the company’s current strategy where business transformation and growth are to the fore. Reflecting Tabreed’s core values, the branding is more modern and dynamic, bolder in look and feel, and able to accurately articulate the company’s role in society: that of a catalyst for change with progress as its central tenet.
Following the unveiling, Khaled Abdulla Al Qubaisi, Tabreed’s Chairman, said: “Tabreed is a company founded on the unending pursuit of progress and this is abundantly clear with our new corporate identity. It accurately portrays us as dynamic, modern and forward-thinking. ‘Essential for Progress’ represents what Tabreed is all about as we work together with our stakeholders, collaborators and customers, helping to shape a more sustainable future for communities all around the world.”
Tabreed provides essential district cooling services to the most prestigious landmarks in the UAE and the wider GCC and, for the past 12 months, has worked alongside Emaar to meet the requirements of Downtown Dubai, including Dubai Opera, Dubai Mall and the Burj Khalifa itself.
Commenting on the event, Tabreed’s Chief Executive Officer, Bader Al Lamki, said: “Essential for Progress’ is at the core of what Tabreed is. A company providing a vital service, allowing people and communities to flourish, through the deployment of critical infrastructure, at the heart of the region’s economic development. A company that drives progress, by fostering a progressive, diverse, inclusive, people-centred HR culture. A company that drive progress by executing on its ambitious expansion strategy to advance sustainable cooling globally and be an important contributor to the transition towards a greener, more sustainable economy.
“Unveiling our new brand identity on the Burj Khalifa was a fitting and appropriate springboard and, over the coming months and years, we will be telling our inspirational story to the world. Tabreed is a force for good in communities all around the globe and we look to the future with eager anticipation. We are catalysts for change and champions of sustainable progress, and I am certain our new look will resonate with anyone who sees it.” -- Tradearabia News Service