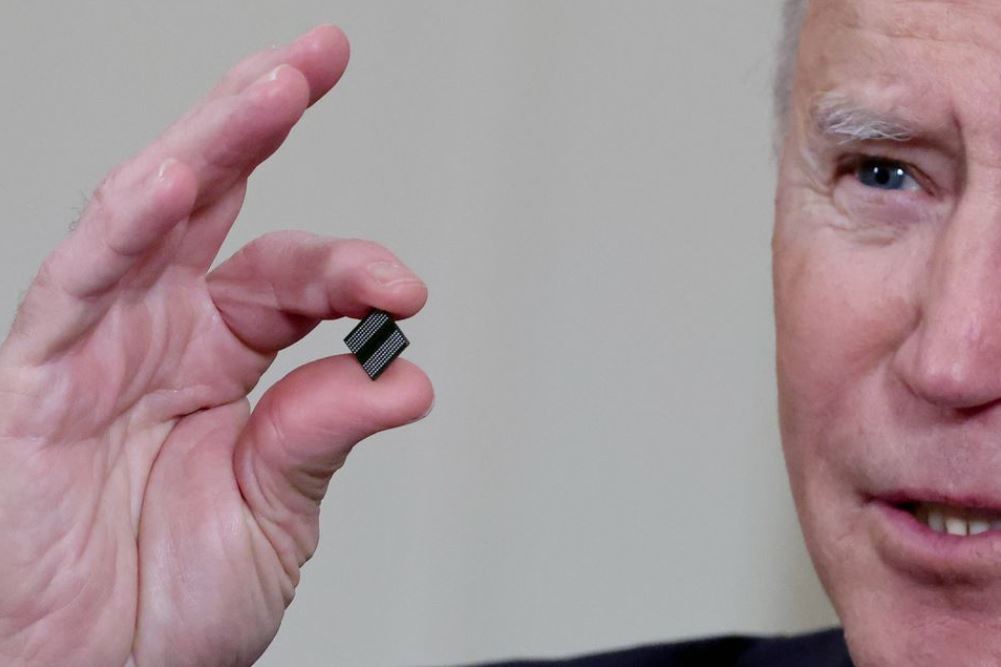 US President Joe Biden delivers holds a semiconductor chip as he speaks prior to signing an executive order, aimed at addressing a global semiconductor chip shortage, in the State Dining Room at the White House in Washington, US, February 24, 2021. (Image credit: Reuters)

To understand President Joe Biden’s challenge in taming a semiconductor shortage bedeviling automakers and other industries, consider a chip supplied by a US firm for Hyundai Motor Co’s new electric vehicle, the IONIQ 5.

Production of the chip, a camera image sensor designed by On Semiconductor, begins at a factory in Italy, where raw silicon wafers are imprinted with complex circuitry.

The wafers are then sent first to Taiwan for packaging and testing, then to Singapore for storage, then on to China for assembly into a camera unit, and finally to a Hyundai component supplier in Korea before reaching Hyundai's auto factories.

A shortage of that image sensor has led to the idling of Hyundai Motor’s (005380.KS) plant in South Korea, making it the latest automaker to suffer from global supply woes that crippled production at most automakers including General Motors Co and Ford Motors Co and Volkswagen.

And the winding journey of the image sensor shows just how complicated it will be for the chip industry to both ramp up capacity to address the current shortage and re-invigorate US chip manufacturing. For a graphic, click https://tmsnrt.rs/3dW8nbN

US President Joe Biden on Monday convened semiconductor industry executives in Washington to discuss solutions to the chip crisis, the latest move in a broader effort to bolster the domestic chip industry. He’s also proposed $50 billion to support chip manufacturing and research as part of his $2 trillion infrastructure proposal, which he said would help the United States win the global competition with China. read more

Much of that money will likely go towards the construction of multi-billion-dollar advanced chip plants by Intel, Samsung and TSMC. But industry executives say addressing the broader supply chain is crucial, and the Biden administration faces complicated choices on which elements of it to subsidize.

“Trying to reconstruct an entire supply chain from upstream to downstream in a single given location just isn’t a possibility," David Somo, senior vice president at ON Semiconductor, told Reuters. "It would be prohibitively expensive."

The United States now only accounts for about 12 per cent of worldwide semiconductor manufacturing capacity, down from 37 per cent in 1990. More than 80 per cent of global chip production now happens in Asia, according to industry data.

Producing a single computer chip can involve more than 1,000 steps, 70 separate border crossings and a host of specialized companies, most of them in Asia and largely unknown to the public.

The process starts with plate-size discs of raw silicon. At chip factories known as 'fabs,' circuits are etched into the silicon and built up on its surface through a series of complicated chemical processes.

The next step - packaging - offers a good illustration of the supply chain challenges.

Wafers emerge from fabs with hundreds or even thousands of fingernail-sized chips on each disc. They must be cut up into individual chips and put into a package.

Traditionally that meant placing each chip onto a “lead frame” and soldering it to a circuit board. The entire assembly would then be packaged in a resin case to protect it.

That process is very labour-intensive, leading chip companies to outsource it decades ago to countries including Taiwan, Malaysia, the Philippines and China.

The packaging step itself has its own supply chain: South Korea's Haesung DS, for example, makes packaging components for automotive chips, exporting them to Malaysia or Thailand for customers including Infineon and NXP. These companies, or in some cases a sub-contractor, then assemble and package chips for automotive suppliers like Bosch and Continental, which in turn supply final products to automakers.

“If they (the Biden administration) are going to be successful with this, they are going to have to help rebuild the package industry here in the United States," said Dick Otte, CEO of Promex, a California-based chip packaging firm.

"Otherwise it is a waste of time. It is like building a car and not having a body to put on it."

But newer chip packaging processes are far less labour-intensive, leading some US chipmakers to believe they can be brought back from abroad.

In October, Minnesota-based chip foundry, SkyWater Technology took over a facility in Florida where it plans to build out advanced packaging lines.

“There's kind of an industry-wide agreement that all this needs to happen here,” Thomas Sonderman, chief executive, SkyWater Technology, said.

Rebuilding the US packaging industry would not only insulate chip companies and their customers from political risk, it could also help them break free of the long cycles involved in creating new chips, said Tony Levi, a professor of electrical and computer engineering at the University of Southern California.

Levi said that Arizona, Texas and New York – where Intel, TSMC, Samsung and GlobalFoundries all have existing or planned facilities – would be suited to cluster supply chain elements like packaging.

“What the US is very good at is close collaboration between system design, product design and the manufacturing itself,” Levi said.

Still, it remains to be seen how the Biden Administration will balance the demands of the many sub-sectors of the chip industry.

Numerous firms, many of them overseas, provide critical foundry materials including wafers and gases. The sophisticated tools used for advanced chip production are mostly made in the United States, but that's not the case for factory components such as the robotic systems that whisk chips among the various process steps.

On top of that, some in the industry argue that the US needs to support not only new cutting-edge fabs, but older technology too. It's the more mature chips that are in severe shortage, noted Tyson Tuttle, CEO of Austin-based silicon design firm, Silicon Labs.

"We have a mismatch of capital in the semiconductor industry," he said, with too much of the money going to the most advanced technologies.

E. Jan Vardaman, President at TechSearch International Inc, said the chip packaging industry has been under severe price pressure, leading to smaller margins than chip factories and chip design firms. "From a financial and economics point of view, it does not make sense for them to make a big investment."

“Simply throwing money at this does not solve the problem. It is a more complex problem.”