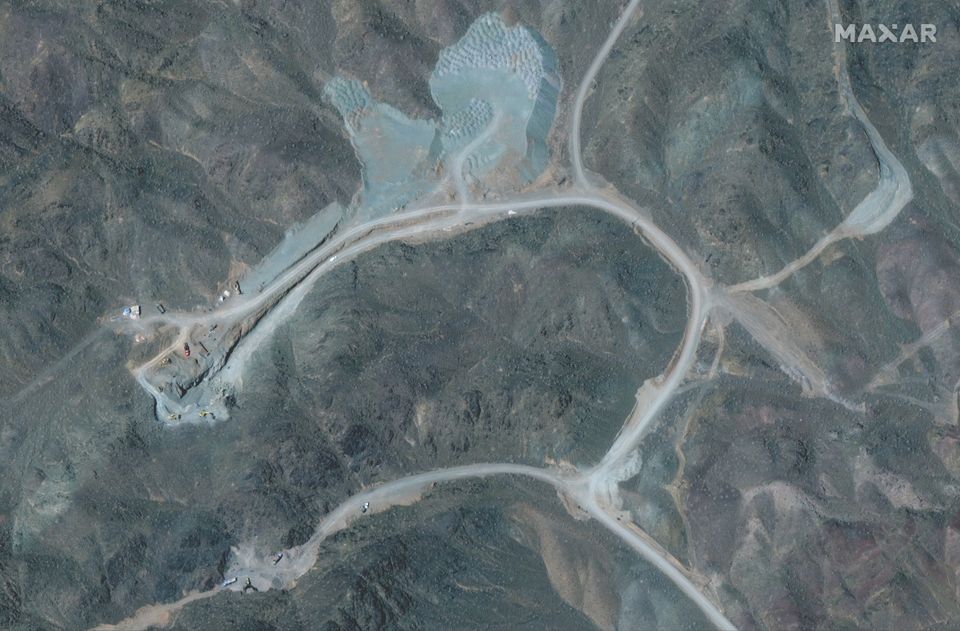 A view of the Natanz uranium enrichment facility 250 km (155 miles) south of the Iranian capital Tehran, in this Maxar Technologies satellite image taken last week and obtained by Reuters on April 12, 2021. (Reuters Photo)

Iran said on Tuesday it will start enriching uranium to 60% purity, a move bringing the fissile material closer to levels suitable for a bomb, after accusing Israel of sabotaging a key nuclear installation.

The disclosure came soon before the resumption of talks in Vienna aimed at reviving Iran's 2015 nuclear deal with major powers, an accord Israel fiercely opposed, after former U.S. President Donald Trump abandoned it three years ago.

A fissile purity of 90% is suitable for a nuclear bomb.

However, an Iranian official told Reuters later that "60% enrichment will be in small quantity" only.

"From tonight, practical preparations for 60% enrichment will begin in Natanz; 60% uranium is used to make a variety of radiopharmaceuticals," the semi-official Fars news agency quoted Iranian nuclear agency spokesman Behrouz Kamalvandi as saying.

The International Atomic Energy Agency, the U.N. nuclear watchdog, said it had been informed of Iran's decision.

Last week, Iran and the global powers held what they described as "constructive" talks to salvage the 2015 accord, which has unravelled as Iran has breached its limits on uranium enrichment since Trump re-imposed harsh sanctions on Tehran.

The deal had capped the level of purity to which Iran can enrich uranium hexafluoride, the feedstock for centrifuges, at 3.67%, far below the 90% needed for bomb-grade material.

Iran in recent months has raised enrichment to 20% purity, a level where uranium is considered to be highly enriched and is a significant step towards weapons-grade. Three-five percent is broadly the level required to run civilian nuclear power plants.

The biggest obstacle to producing nuclear weapons is accumulating sufficient quantities of fissile material - either 90% enriched uranium, or plutonium - for the core of a bomb.

One of the central objectives of the 2015 nuclear containment deal was to extend the time Iran would need to do this, if it chose to, to a year from about 2-3 months.

Iran says it has never sought to obtain or develop nuclear weapons, and that it seeks nuclear technology for civilian purposes in the fields of medicine or energy.

Western intelligence services believe Iran had a clandestine nuclear weapons programme that was mothballed in 2003, though arch-adversary Israel believes it continues in some form and sees Tehran's nuclear activity as an existential threat.

Iran's top diplomat said earlier on Tuesday that the blast in the underground Natanz plant that it blames on Israel was a "very bad gamble" that would boost Tehran's leverage in the talks to salvage the nuclear deal.

"I assure you that in the near future more advanced uranium enrichment centrifuges will be placed in the Natanz facility," Foreign Minister Mohammad Javad Zarif told a news conference alongside his visiting Russian counterpart in Tehran.

The nuclear talks are due to resume on Thursday in Vienna.

Tehran has said the explosion at Natanz, which knocked out electricity in centrifuge production halls, was sabotage by Israel and vowed revenge for the incident, which appeared to be latest episode in a long-running covert war.

Israel, which the Islamic Republic does not recognise, has not formally commented on the matter. read more

U.S. President Joe Biden has said Iran must resume full compliance with curbs on its enrichment activity mandated by the deal, which won the lifting of all international sanctions against Tehran, before Washington can rejoin the pact.