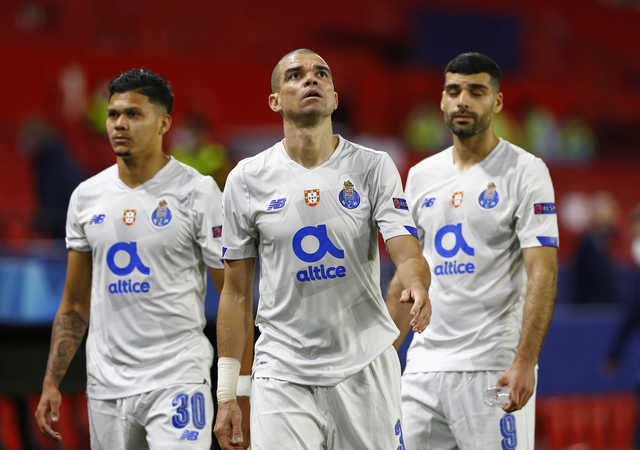 Ramon Sanchez Pizjuan, Seville, Spain - April 13, 2021 FC Porto's Evanilson, Pepe and Mehdi Taremi looks dejected after the match. (Reuters Photo)
Mehdi Taremi scored a stunning overhead kick to hand Porto a 1-0 victory over Chelsea in Tuesday's Champions League quarter-final second leg but it was not enough to prevent the Premier League side from progressing to the last four with a 2-1 aggregate win.
The substitute had been responsible for his side's only attempt on target as they chased a 2-0 deficit from last week's first leg but he provided an emphatic response in a cagey game with his acrobatic strike deep into added time.
Thomas Tuchel's side had a healthy lead from last week's away game in Seville and had to withstand an intense start from Porto in their home leg back at the Sanchez Pizjuan Stadium, the venue of both games due to Portugal's coronavirus restrictions.
Porto's Jesus Corona closed down Chelsea's Edouard Mendy early on but failed to make the most of the keeper's botched pass. The Mexican winger missed another good chance later in the half when he shuffled past Ben Chilwell in the area only to blast over the crossbar.
Chelsea's Mason Mount and Christian Pulisic each came close to breaking the deadlock after the interval but the Londoners were more focused on keeping Porto at bay.
Taremi's last-gasp strike prevented them from keeping a clean sheet but Chelsea still managed to reach the semi-finals of Europe's top competition for the first time since 2014.