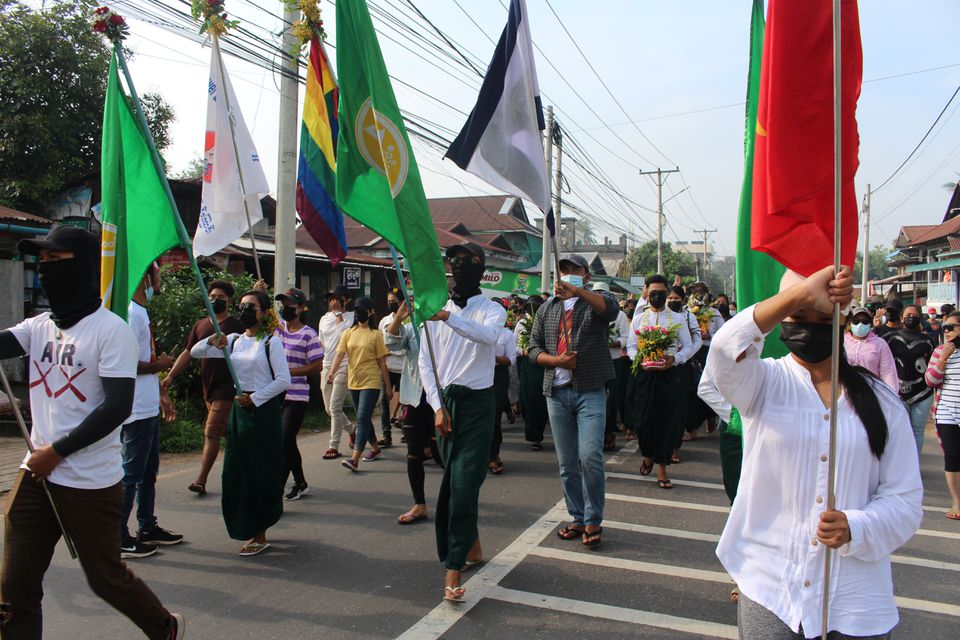 People march during a protest against the military coup in Dawei, Myanmar April 13, 2021. (Reuters Photo)

Opponents of Myanmar's coup splashed red paint and dye on roads and signs outside government offices on Wednesday to represent the blood of people killed protesting against the junta, on the second day of the traditional new year holiday.

The display aimed at shaming the military took place in various towns and cities, according to pictures posted by media outlets, as people answered a call by activists to join what they termed a bloody paint strike.

Some people marched with signs calling for the release of the leader of the ousted government, Nobel laureate Aung San Suu Kyi. She has been detained since the Feb. 1 coup on various charges including violating an official secrets act that could see her imprisoned for 14 years.

Her lawyers have denied the charges against her.

"Please save our leader - future - hope," read a sign with a picture of Suu Kyi held by a young woman among several thousand people marching in the second city of Mandalay, according to a picture published by the Mizzima news service.

There were no immediate reports of violence at any of the protests on Wednesday, but information has become scarce because of junta curbs on the internet.

The coup has plunged Myanmar into crisis after 10 years of tentative steps toward democracy with daily protests and various campaigns of defiance including strikes by workers in many sectors that have brought the economy to a standstill.

The five-day New Year holiday, known as Thingyan, began on Tuesday but pro-democracy activists cancelled the usual festivities to focus on their opposition to the generals who seized power.

The military says the protests are petering out. Activists have planned different shows of defiance every day over the holiday, which ends on Saturday.

An activist group, the Assistance Association for Political Prisoners, says the security forces have killed 710 protesters since the ousting of Suu Kyi's government.

The United Nations human rights office said on Tuesday it feared that the military clampdown on the protests risked escalating into a civil conflict like that seen in Syria.

The United States and other Western countries have imposed limited sanctions focused on the military. Southeast Asian neighbours have been encouraging talks between the Myanmar sides but without progress.

The U.S. ambassador to Myanmar, Thomas Vajda, said in a new year message he was aware that many people were making sacrifices and suffering for their beliefs and convictions in these "very difficult times".

"I’m deeply impressed with your courage and your commitment," Vajda said.

"Let me also reconfirm the commitment of my colleagues and I ... to do all we can to support the people of Myanmar in your aspirations for genuine democracy, peace, and freedom.”

The European Union's foreign policy chief, Josep Borrell, said this week Russia and China, which have close ties with the military, were blocking a united response to the coup including attempts to impose an arms embargo.

The U.N. Security Council has called for the release of Suu Kyi and others but stopped short of condemning the coup.

Small blasts have been going off in different places over recent days with the latest two explosions in the central city of Monywa on Wednesday wounding one person, the Monywa Gazette reported.

There have been no claims of responsibility.

The coup has also rekindled hostilities in old conflicts between the military and ethnic minority forces fighting for autonomy in border regions.

Government forces had suffered heavy casualties in an assault on ethnic Kachin forces in the north this week, the Myanmar Now media group reported.

A spokesman for the junta could not be reached for comment.