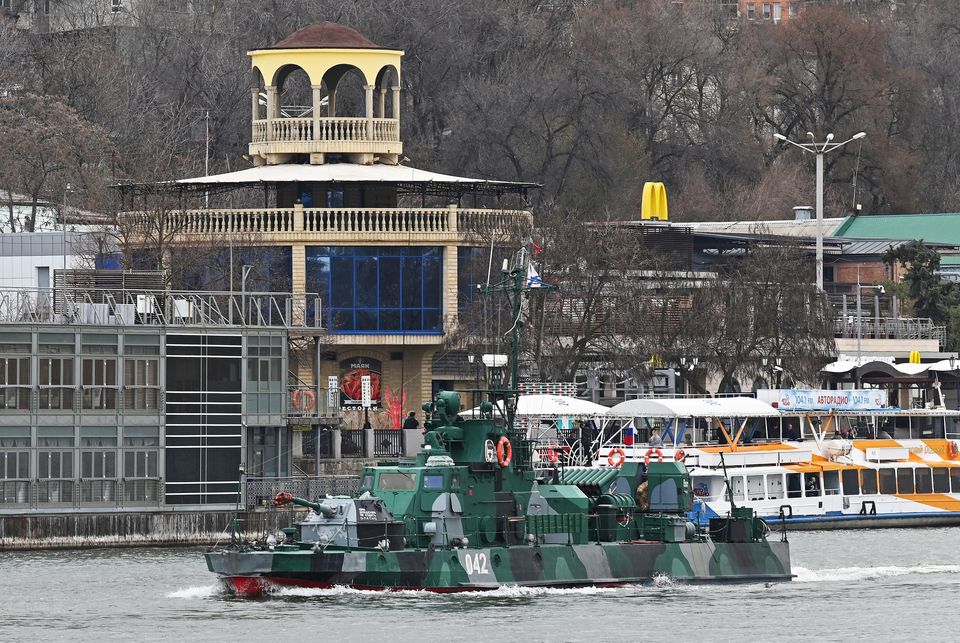 A Shmel-class gunboat of the Russian Navy's Caspian Flotilla sails along the Don River during the inter-fleet move from the Caspian Sea to the Black Sea, in Rostov-on-Don, Russia April 13, 2021. (Reuters Photo)

Fund managers are trimming exposure to Russia and Ukraine on fears that years of tensions could finally erupt into outright war, bringing economic ruin for Ukraine and more sanctions on Russia.

But with largest build up of Russian troops on the Ukrainian border since Moscow's annexation of Crimea in 2014, and uncompromising rhetoric from the Kremlin, some investors feel market positioning is still not cautious enough. read more

Concerns about an escalation, including the immediate threat of sanctions, were partly assuaged after a phone call on Tuesday between U.S. President Joe Biden and his Russian counterpart Vladimir Putin in which Biden proposed a summit meeting between the pair and stressed U.S. commitment to Ukraine's territorial integrity. The Kremlin said it would study Biden's proposal. read more

Aberdeen Standard Investments, with around $640 billion in assets under management, reduced some rouble exposure before the latest escalation, but remains exposed to Russia and Ukraine bonds.

"It is not great news to see that escalation but I think the stakes on both sides are quite high to not go into a full blown conflict," said Viktor Szabo, portfolio manager at Aberdeen Standard Investments. "We know that occupying and rebuilding Donbass would come at an extremely high cost for Russia, in terms of financials, in terms of lives and in terms of sanctions."

So far assets don't appear to be pricing in full-blown war, despite some sell-off in recent weeks as tensions ratcheted up.

Russia's rouble on Wednesday scaled two week highs, while dollar-denominated sovereign bonds , recovered from a near 12-month trough as investors bet Tuesday's phone call might keep sanctions off the table for now.

The cost of insuring the pair's sovereign debt, as measured by five-year credit default swaps, are a long way off the highs of early 2015, the last time serious fighting flared between the two nations.

Some investors have pared risk.

JPMorgan said last week it had moved to market-weight from over-weight on Russian local bonds and the Russian rouble.

"I'm expecting the situation to get worse before it gets better."

The volume of local bond holdings held by foreign portfolio investors has been declining since late March.

Ukraine is vulnerable to any conflict escalation with an economy much smaller than Russia's, as well as weaker reserves, more feeble fiscal and current account positions and larger debt.

The tensions with Russia and a recent spike in COVID-19 infections threaten Ukraine's economic recovery from the pandemic and prospects for GDP warrant holders.

In its first payout to the holders of the warrants, included as part of the government's 2015 debt restructuring, Ukraine is due to pay about $40 million in May based on 2019 GDP growth of 3.2%.

Kyiv's Ministry of Finance said planned domestic borrowing for 2021 was on track and it did not see liquidity risks for making any payments, including obligations under the warrants.

"The domestic story in Ukraine, barring the political risk aspect of it, is actually pretty decent," said Jupiter's Karim.

For Russia, the risk revolves around sanctions, a familiar headache for investors in Moscow's assets.

Many asset managers, such as Jupiter and BlueBay, have built up defensive positions in recent months as the prospect has risen of penalties from the Biden administration in retaliation for alleged Russian meddling in the U.S. election and cyber hacks. Moscow denies interfering.

An invasion of Ukraine would raise the threat still further, with everything from financing curbs on major Russian businesses to restrictions on sovereign rouble-denominated debt potential targets, say analysts.

U.S. investors have already been banned from buying new dollar-denominated Russian debt since 2014.

The share of foreign investors among holders of the OFZ treasury bonds has fallen this year to near five-year lows.

And while domestic borrowing may become trickier under further sanctions, Russia's longer-term economic growth may be most at risk.

"It's a slow-grind weakening of the macro story in terms of growth and living standards," said BlueBay's Ash.

"Even with oil prices around $60-70 a barrel and a strong balance sheet, Russia's potential growth is probably less than 2% because foreigners and Russians don't invest, presumably due to concerns around geopolitics."