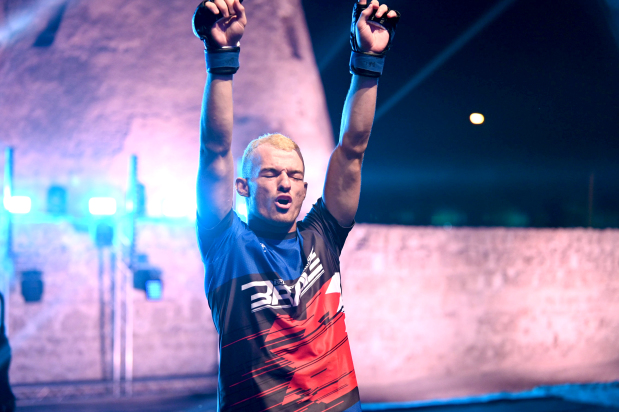 Glenn McVeigh has set sights on a spot at BRAVE CF 51 taking place on June 4 in Belarus.

McVeigh started out his professional mixed martial arts career at BRAVE Combat Federation by taking on a tough challenge for his promotional and professional debut, and looking to end Muhammad Mokaev’s undefeated winning streak on short notice.

Despite losing via decision, the fight revealed a lot about McVeigh’s character and how it takes a lot to tear down his confidence or intimidate him. He returned to the BRAVE CF Cage with a second loss at BRAVE CF 49, but wowed the crowd when he accepted a fight a week later on short notice against KHK MMA’s Abdulmanap Magomedov at BRAVE CF 50. He ended up with his arms raised for the first time in the pro ranks.

Still on a high from his two Kombat Kingdom appearances, McVeigh has been itching for another fight and the BRAVE CF announcement of their 51st event was the perfect fuel for a war of words.

Shortly after the announcement, McVeigh shared a highlight reel from his latest victory against Magomedov and in the caption took a shot at Jamie Kelly, Mokaev’s second BRAVE CF opponent who lost via rear-naked choke.

The caption “Put some respect on my name, BRAVE CF. I’m ready for June 4th. Let’s go one more time. Who want to see me destroy little Jamie Kelly?” triggered a response from Kelly who had been silent since his last loss to Mokaev. He responded with “You’ve won 1 in your last 3. Stop calling out Flyweights”.

The response was what McVeigh was searching for to bring back his trash talking antics. He replied to Jamie with “you have a 3-1 record and fight 0-38 guys, and you’ve fought more times at 135 lbs than Flyweight... Stop looking for easy fights bum”.

“Not one guy you ever beat had won a fight. I guess we know why you don’t want to fight. You can’t hide the truth kid,” says McVeigh, who then apologised, before throwing back another piece of trash talk at Kelly.

The feud between these two fighters seems to be deeper than mere words, and they look to continue taking shots at one another as they angle for a BRAVE CF 51 spot.