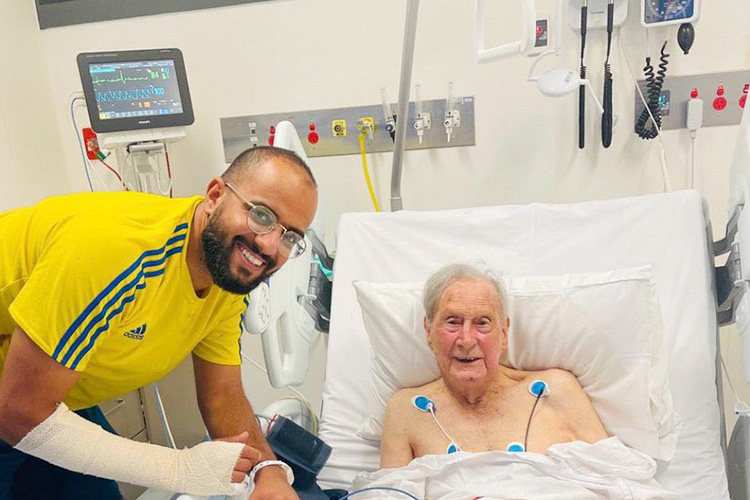 Noah Al-Harbi with the elderly Australian man at the hospital in Adelaide.

A young Saudi man risked his life to rescue his 94-year-old Australian neighbour from a house fire, local media posted.

Noah Al Thakry Al Harbi, who studies in Adelaide, said he was taking a nap in the afternoon when he woke up to the screams of a woman in the vicinity.

The woman was calling for help after a fire broke out in a nearby house. Al-Harbi was surprised that smoke was rising from the house of his 94-year-old neighbour.

Al-Harbi told media, “As soon as I came out of my house, I saw thick smoke billowing from my elderly neighbour’s house. Without wasting a minute I rushed to the burning house and tried to open the front door, but I could not.

“So I went to the back window, broke it and managed to get my elderly neighbour out as the flames reached the back door.”

Paramedics treated the elderly man at the scene and he was transferred to hospital.

Nooh Al-Harbi’s heroic act became an instant hit and he has emerged as a hero across social media platforms.