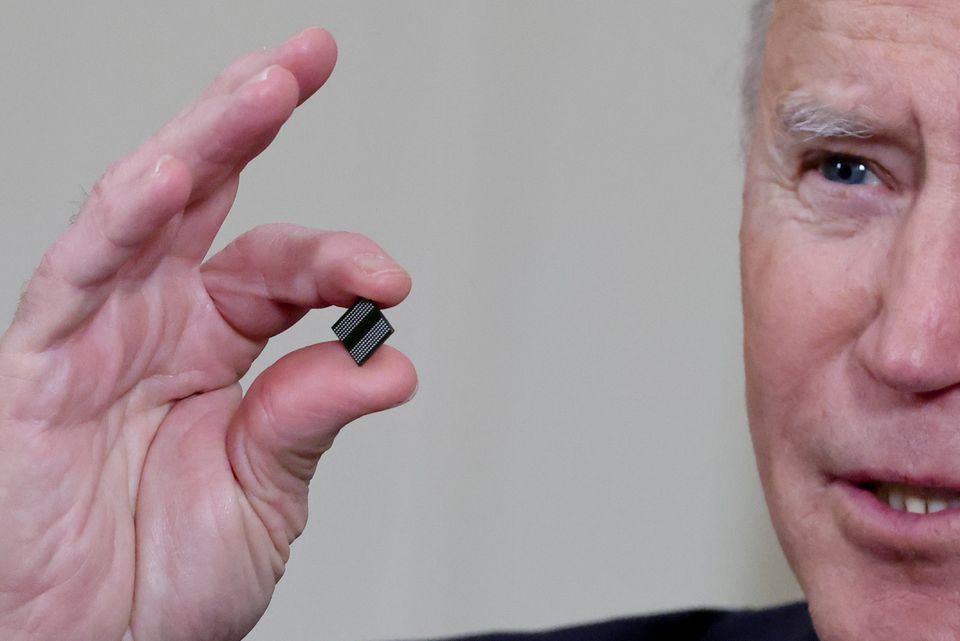 U.S. President Joe Biden delivers holds a semiconductor chip as he speaks prior to signing an executive order, aimed at addressing a global semiconductor chip shortage, in the State Dining Room at the White House in Washington, U.S., February 24, 2021. (Reuters Photo)

In a letter to U.S. Commerce Secretary Gina Raimondo, Representative Michael McCaul and Senator Tom Cotton said the rule that requires U.S. licenses to sell semiconductors made abroad with U.S. technology to Huawei should apply to any Chinese company designing more advanced chips at 14-nanometers or below.

The letter, which is dated April 13 and was made public on Thursday, seeks licenses for the sale of electronic design automation (EDA) software, among other curbs on chip-related sales to Chinese companies.

The actions would "ensure U.S. companies as well as those from partner and allied countries are not permitted to sell the communists the rope they will use to hang us all," the letter said.

A spokeswoman for the Commerce Department did not immediately respond to a request for comment.

The United States last year issued a rule requiring licenses for sales of semiconductors to Huawei made overseas with U.S. chip-making equipment, expanding its reach to halt exports to the company.

Huawei was added to the Commerce Department's "entity list" in 2019 over national security and foreign policy concerns.

The blacklisting restricted sales to Huawei from U.S. suppliers, but did not crack down on commercially available chips made abroad. In response, the United States expanded the Foreign Direct Product Rule, which subjects foreign-made goods based on U.S. technology or software to U.S. regulations, for Huawei.

This week's letter was sent after Tianjin Phytium Information Technology and six other Chinese supercomputing entities were placed on the entity list in April for supporting military modernization efforts.

Cotton and McCaul want to not only restrict U.S. sales to Phytium, but to require a license for any company that uses American tools to make a Phytium-designed semiconductor chip.

Anything short, they said, "would be a half measure masquerading as a forceful action."