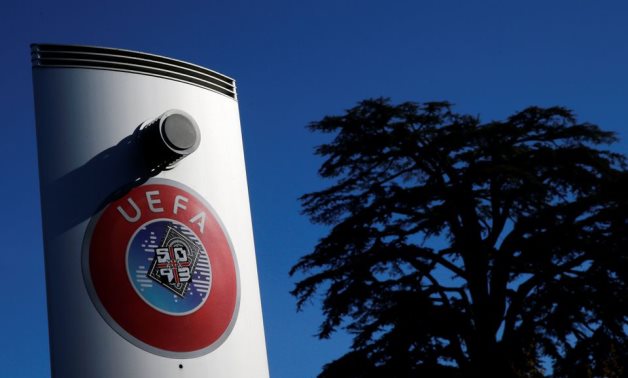 MANCHESTER - Twelve of Europe's top football clubs launched a breakaway Super League on Sunday, launching what is certain to be a bitter battle for control of the game and its lucrative revenue.

The move sets up a rival to UEFA's established Champions League competition and was condemned by football authorities and political leaders.

Manchester United, Real Madrid and Juventus are among the leading members of the new league but UEFA has threatened to ban them from domestic and international competition and vowed to fight the move.

As well as United, Premier League clubs Liverpool, Manchester City, Chelsea, Arsenal and Tottenham Hotspur have signed up to the plans.

Barcelona and Atletico Madrid from Spain join Real. AC Milan and Inter Milan make up the trio from Italy along with Juventus.

The Super League said that they aimed to have 15 founding members and a 20-team league with five other clubs qualifying each season.

The clubs would share a fund of 3.5 billion euros ($4.19 billion) to spend on infrastructure projects and to deal with the impact of the Covid-19 pandemic. The money would not be available to spend on players.

The League said they will make 'solidarity payments' to the rest of European football which will exceed those currently offered by UEFA and which "are expected to be in excess of 10 billion euros" over the 23-year commitment period the clubs have entered into.

"We will help football at every level and take it to its rightful place in the world. Football is the only global sport in the world with more than four billion fans and our responsibility as big clubs is to respond to their desires," said Real Madrid president Florentino Perez, the first chairman of the Super League.

No German or French clubs have yet to be associated with the breakaway.

World soccer's governing body FIFA expressed its "disapproval to a 'closed European breakaway league' outside of the international football structures".

But noticeably there was no mention of a previous threat from FIFA to ban any players taking part in a breakaway from participating in World Cups.

The announcement came just hours before UEFA is due to sign off on its own plans for an expanded and restructured 36-team Champions League on Monday.

UEFA issued a strong statement jointly with English, Spanish and Italian leagues and football federations, saying they were ready to use "all measures" to confront any breakaway and saying any participating clubs would be banned from domestic leagues, such as the Premier League.

"The clubs concerned will be banned from playing in any other competition at domestic, European or world level, and their players could be denied the opportunity to represent their national teams," UEFA said.

"We thank those clubs in other countries, especially the French and German clubs, who have refused to sign up to this. We call on all lovers of football, supporters and politicians, to join us in fighting against such a project if it were to be announced. This persistent self-interest of a few has been going on for too long. Enough is enough."

The moves were condemned by football authorities across Europe and former players such as Manchester United's ex-captain Gary Neville who called it "an absolute disgrace" and said the club owners were motivated by "pure greed".

Reacting to official Arsenal tweet saying: "We are one of 12 founding clubs of the European Super League", Arsenal Supporters' Trust wrote on Twitter: "The death of Arsenal as a sporting institution."

Top French club Paris St Germain have not been reported to have signed up to the plan and President Macron also raised his voice against the breakaway.

"The president of the republic welcomes the position of French clubs to refuse to participate to a European football Super League project that threatens the principle of solidarity and sporting merit," the French presidency said in a statement sent to Reuters.

"The French state will support all the steps taken by the LFP, FFF, UEFA and FIFA to protect the integrity of federal competitions, whether national or European," the Elysee added, citing the national, European and globally soccer governing bodies.

"Plans for a European Super League would be very damaging for football and we support football authorities in taking action," Johnson tweeted.

"They would strike at the heart of the domestic game, and will concern fans across the country. The clubs involved must answer to their fans and the wider footballing community before taking any further steps."

There have been reports of a breakaway for a number of years and they returned in January with several media reported a document had been produced outlining the plans.

In October, then Barcelona president Josep Maria Bartomeu said the club had accepted a proposal to join a breakaway league.

Those reports led FIFA and UEFA to warn that they would ban any players involved in a breakaway from playing in the World Cup or European Championship.

UEFA has proposed major changes to its Champions League which had received support from many clubs and organisation.

The changes will see the competition increase to 36 from 32 teams, and an overhaul of the group stage into a single table rather than the current groups of four clubs.

Teams would play 10 matches each in the group stage rather than the six they currently play and a playoff round would also be introduced before the last 16.

But while there has been a broad consensus and those reforms, the big clubs made a late push to have changes to the governance and control of the competition before making Sunday's dramatic move.

"FIFA always stands for unity in world football and calls on all parties involved in heated discussions to engage in calm, constructive and balanced dialogue for the good of the game and in the spirit of solidarity and fair play.

"We will, of course, do whatever is necessary to contribute to a harmonised way forward in the overall interests of football."

"UEFA, the English FA, RFEF, FIGC, the Premier League, La Liga, Lega Serie A, but also FIFA and all our member associations – will remain united in our efforts to stop this cynical project, a project that is founded on the self-interest of a few clubs at a time when society needs solidarity more than ever.

"We will consider all measures available to us, at all levels, both judicial and sporting in order to prevent this happening."

"It is clear that this would be damaging to English and European football at all levels and will attack the principles of open competition and sporting merit which are fundamental to competitive sport."

"Fans of any club in England and across Europe can currently dream that their team may climb to the top and play against the best. We believe that the concept of a European Super League would destroy this dream."

"Plans for a European Super League would be very damaging for football. They would strike at the heart of the domestic game, and will concern fans across the country. The clubs involved must answer to their fans."

JULIAN KNIGHT, CHAIRMAN OF THE DIGITAL, CULTURE, MEDIA AND SPORT COMMITTEE OF BRITAIN'S HOUSE OF COMMONS

"Football needs a reset, but this is not the way to do it. The interests of community clubs must be put at the heart of any future plans."

"That phrase 'the game's gone' always used to annoy me. But with VAR and now this, nothing else better sums up where we are. It's the phrase of the day. #TheGamesGone."

"We have been always against a Super League. The only viable project is the Champions League reform promoted by UEFA."

"The German Football Association (DFB) is against the concept of a European Super League. It is the performance that determines promotion and relegation. Economic interests of a few clubs should not end the practiced solidarity in football."

"The newly proposed top European competition is nothing more than a selfish, egotistical proposal designed to further enrich the already super rich.

"It will undermine the appeal of the whole game and have a deeply damaging impact on the immediate and future of LaLiga, its member clubs, and all the entire footballing ecosystem."

"The president of the Republic welcomes the position of French clubs to refuse to participate to a European football Super League project that threatens the principle of solidarity and sporting merit."

"We must defend a values-driven European model of sport based on diversity and inclusion.

"There is no scope for reserving it for the few rich and powerful clubs who want to sever links with everything associations stand for - national leagues, promotion and relegation and support to grassroots amateur football."

"The proposed closed competition of super rich clubs would form a privileged caste outside the structures of European club football, with no other purpose than making profit."

"The board members of the European Club Association (ECA) came together for a virtual meeting on Sunday evening, where it was agreed that the board's decision from last Friday still stands.

"This decision dictates that all clubs wish to implement the proposed reforms to the UEFA Champions League. The ECA board members took a clear stance in rejecting plans for the establishment of a Super League."

"Does that sound like sport or football to you? To me it sounds a grotesque concept."

"We are looking to Government, FIFA, UEFA, The FA, The Premier League and the EFL to ensure that this proposal is stopped in its tracks and the future of the English game as a whole is secured."

"Along with fan groups at Liverpool, Manchester United, Manchester City, Arsenal and Chelsea, we wholeheartedly oppose the move to create a closed shop for Europe’s elite."

"The death of Arsenal as a sporting institution."

"We, along with other groups involved in flags, will be removing our flags from The Kop. We feel we can no longer give our support to a club which puts financial greed above integrity of the game."

"I'm disgusted with Manchester United and Liverpool the most. They're breaking away to a competition they can't be relegated from? It's an absolute disgrace.

"The owners of Man United, Liverpool, Chelsea and Man City have nothing to do with football in this country."

"Talk of a Super League is a move away from 70 years of European club football. In my time at United, we played in four Champions League finals and they were always the most special of nights."

"I love football and I cannot remain silent about this. I believe in an improved Champions League, but not in the rich stealing what the people created, which is nothing other than the most beautiful sport on the planet."

"This project is disgusting, not fair and I'm disappointed to see clubs I represented involved. Fight against this!"