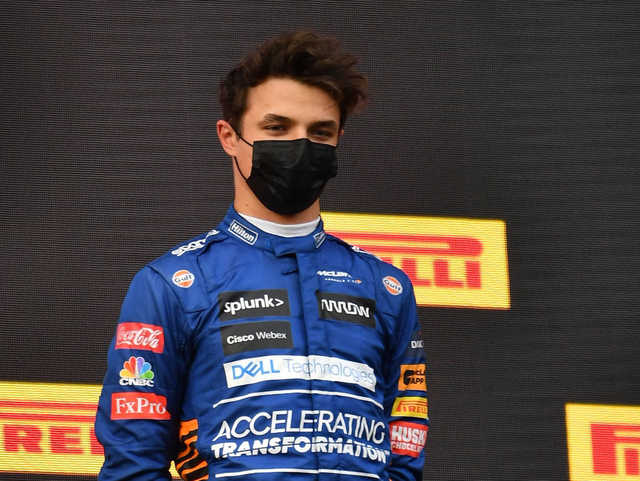 McLaren's Lando Norris on the podium during the national anthems after finishing third. (Reuters Photo)

McLaren's Lando Norris celebrated the second podium of his Formula One career at the Emilia Romagna Grand Prix on Sunday, with team boss Andreas Seidl in no doubt that the youngster had raised his game.

Told he had been voted driver of the day by fans, the 21-year-old Briton still feigned surprise.

"They did? I didn’t think I had any fans. But thank you very much," he said.

Norris has plenty of support, with 2.8 million followers on Instagram and 981,000 on Twitter and big audiences for his online gaming activities.

Team boss Andreas Seidl said the driver, now in his third full season in Formula One and up against experienced Australian Daniel Ricciardo as his new team mate, had moved up to another level.

"Lando is flying at the moment, he's definitely made the next step as a driver also," Seidl told Sky Sports television after the second race of the year at Italy's Imola circuit.

"Already in Bahrain (the season-opener) you could see that he definitely made the next step, as a person. He digested last season with his engineering team in the right way.

"It's normal also that these young guys make steps, in the first years they have to make it or they will never make it to the top but it's just great how he's pulling it off," added Seidl.

"He has the confidence to put the laps in and what he did today was great."

Norris had beaten himself up on Saturday after a marginal slip in qualifying meant his fastest lap was deleted, a time that would have been good enough for third on the grid.

Instead he started seventh but made sure he got that third place in the end, running second until his tyres wore down and seven-times world champion Lewis Hamilton passed him with two laps to go.

"It’s nice to be fighting these guys. It’s nice to be there on merit and there on pure pace, and hopefully we can have some more in the future," said Norris, who in Austria last July became the youngest British driver to stand on the podium.

"I think apart from Q3 (the final phase of qualifying) it was a pretty perfect weekend."