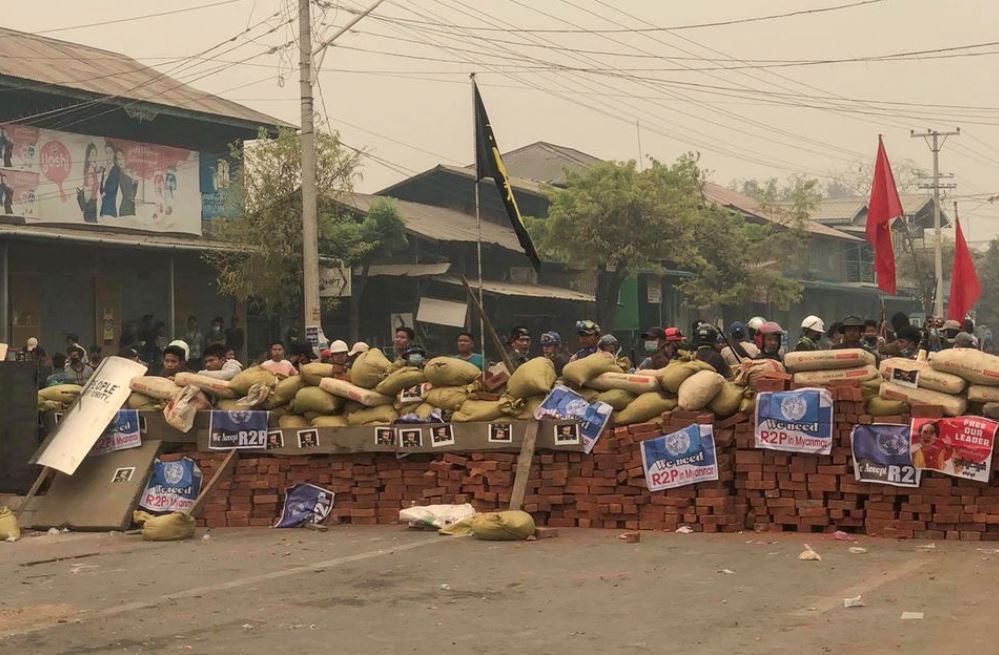 Protesters defend themselves from the troops in Kale, Sagaing region, Myanmar March 28, 2021 in this picture taken March 28, 2021. (Image credit: Reuters)

Sleeping by their makeshift barricades, knots of young men at Tahan in the western Myanmar town of Kale had not expected an attack in the pre-dawn darkness.

Armed with a few hunting guns made by village blacksmiths, catapults, some airguns and Molotov cocktails, they were no match for forces hardened by decades of conflict and equipped with combat weapons.

The first barrage of shots and rocket propelled grenades from Myanmar's army, known as the Tatmadaw, came around 5 a.m. on April 7, the protesters and residents of Kale said.

By evening, the one-sided battle was over, the sandbag barricades had been cleared and 13 people were dead, three people involved in the armed group told Reuters. Soldiers deployed on street corners and remain until now.

"So many people on our side were wounded that we couldn’t do anything and had to retreat," Aung Myat Thu, one 20-year-old protester in Kale, told Reuters from there by messaging app.

Although the resistance in Kale was quickly crushed, it points to a new phase of bloodshed in Myanmar after the Feb. 1 coup, with some protesters now seeking to take up arms against the junta's forces.

The junta did not respond to requests for comment.

The junta-controlled Global New Light of Myanmar newspaper said 18 rioters were arrested in Kale after attacking security forces with homemade weapons. "Some of the members of the security forces were seriously injured," it said

Despite the early setbacks, disparate groups are trying to source better weapons, sharpen tactics, share intelligence and get training from some of the two dozen or so existing ethnic armed groups in Myanmar, several opposition politicians said.

"Some small defence units have been formed across the country, in the community, villages or wards," said Moe Saw Oo, a spokesman for the Committee Representing the Pyidaungsu Hluttaw (CRPH), a body representing ousted lawmakers that has set up a rival national unity government.

"At the same time, we are in coordination with ethnic armed organisations about the establishment of a proper defence force," he said.

Over 700 people have been killed and more than 3,000 have been detained by security forces cracking down on the nationwide protests that have raged since the military deposed the civilian government led by Nobel Laureate Aung San Suu Kyi on Feb. 1.

Even as the fighters in Kale retreated, other groups have sprung up elsewhere. Acts of sabotage, such as the burning of administrative buildings and attacks on businesses linked to the army have broken out the in the main city of Yangon and the second city of Mandalay.

"It is a sign of the determination and the extreme violence the military has been using against protesters rather than a strategic assessment they can take on the might of the military," said analyst Richard Horsey, who recently briefed the U.N. Security Council on the threat of national collapse.

Among the new groups, the Ayeyarwaddy Federal Army announced its arrival last week in the heartland of the Bamar majority, which forms the core of the armed forces as well as Suu Kyi's National League for Democracy.

"Armed revolution is the only way to return the people's power," spokesman Mratt Thu Aung told Reuters via messaging app.

He did not disclose the group's location or the size of its force and Reuters was unable to do so independently.

Pressure to organise an armed group in Kale began in mid-March as the army stepped up violence against protests sweeping the largely Buddhist country of 53 million.

On March 17, police opened fire on an anti-coup rally—killing four people—after chasing protesters to Myohla on Kale's outskirts, said a 36-year-old activist who was there.

"From that point, the people, especially the youth, felt that we needed to do something to defend ourselves," he said, declining to give his name for reprisals against his family.

By late March, at least three barricades were set-up around the main market in Tahan, hundreds of people joining to pile up sandbags. Young people in the town banded together to form the Tahan Civil Defence Group, local activists said.

The group then raised funds and sought out weapons - mainly rudimentary hunting guns made by local blacksmiths, they said.

"At first we had seven guns, which then increased to 15 within a short time," the 36-year-old activist said.

The group went for target practice session in a nearby forest on March 26. Two days later, the Tahan Civil Defence Group held off an assault by junta forces. Shortly after, it combined with other local groups to form the Kalay (Kale) Civil Army.

Such groups were getting help from the CRPH across the country, an official of the group said.

Several thousand young people had been given basic training in arms and fighting by at least four ethnic armed organisations, mostly in Myanmar's border areas, he said.

"More are coming," he said, declining to be named. "If we don't fight, the future of Myanmar is gone."

In Kale, the little-trained fighters were emboldened by early success.

The 19-year-old fighter said he was sleeping between barricades on the main road through Tahan when gunfire woke him.

"I grabbed my hunting gun and two soldiers started shooting at me," he said. "I had one chance to shoot back, but my gun didn't work."

He sheltered behind a wall, then fled during a lull.

"We don't understand the Tatmadaw mindset," the 43-year-old said from a safe house. "That's our mistake."

Several young fighters were among the 13 dead at the end of a day of fighting, activists said.

"We were not safe in Kale anymore," the 19-year-old fighter said by phone from northeastern India, whose border is just over 100 km (60 miles away). Indian authorities declined to comment.

A local NLD lawmaker involved in forming the Kalay Civil Army said fighters had been asked to lay low for now, while equipment and training were improved across Myanmar.

“Maybe the time will come to fight with the Tatmadaw,” the lawmaker said, “For that, we will need good training.”