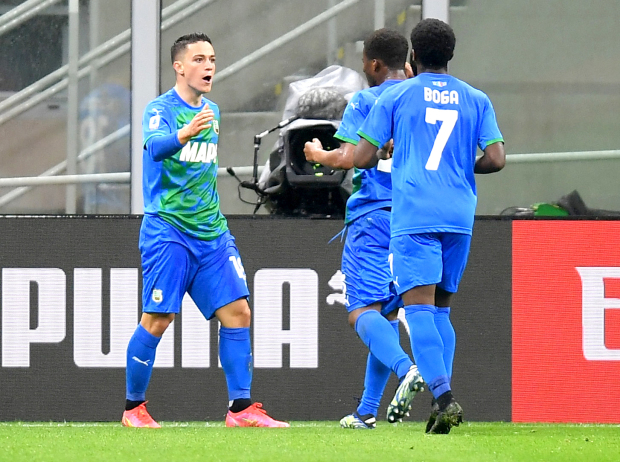 Without injured top scorer Zlatan Ibrahimovic, Milan struggled to break down the visitors early on, but something special from Hakan Calhanoglu gave them the lead on the half-hour mark.

Two goals in seven second-half minutes, however, turned the match on its head, both from substitute Giacomo Raspadori, as he earned Sassuolo a surprise win.

On the day Milan withdrew from the proposed European Super League, a damaging loss means they sit second in the standings, 10 points behind leaders Inter Milan, who drew 1-1 at Spezia later in the night, with a top-four finish far from guaranteed.

“We do not fear missing out, only great determination to qualify (for the Champions League next season),” Milan coach Stefano Pioli said.

“We have three direct clashes with our rivals (for a top-four finish) Lazio, Juventus and Atalanta before the end of the season – those will be decisive.”

Sassuolo coach Roberto De Zerbi said on Tuesday that he favoured boycotting his team’s trip to Milan because of their role in the planned Super League, and he reiterated his opposition after the match.

“I confirm everything I said yesterday, but clearly the Milan players and fans are excluded from my speech,” he said.

“I think I have not offended anybody and I do not have to apologise to anyone. I think I have taken a position to defend football that is my life.”

The quality of Calhanoglu’s opener, a curling effort from outside the penalty area that squeezed inside the post, was worthy of an elite division, but without Ibrahimovic, Milan offered little else up front.

All the attacking intent in the second half came through the visitors, with the quality of the 76th-minute equaliser all in the slick build-up play before Raspadori arrived to slot home.

The winner was all Raspadori’s own doing, as he beat two men before drilling in a shot off the post, becoming the first player to score a Serie A double as a substitute against Milan since 1994-95.

Another home defeat – five of Milan’s six league losses have come on their own patch – means victory for Atalanta at AS Roma tonight would lift them above Milan into third.

Later, Ivan Perisic’s equaliser earned Inter Milan a 1-1 draw at Spezia to move Antonio Conte’s side one step closer to the Serie A title.

A bad error from Inter goalkeeper Samir Handanovic, for the second match in a row, allowed Spezia to sneak into a 12th- minute lead through Diego Farias.

Inter piled men forward and the pressure told as Perisic arrived at the far post to level six minutes before the break after more great work from in-form full back Achraf Hakimi.