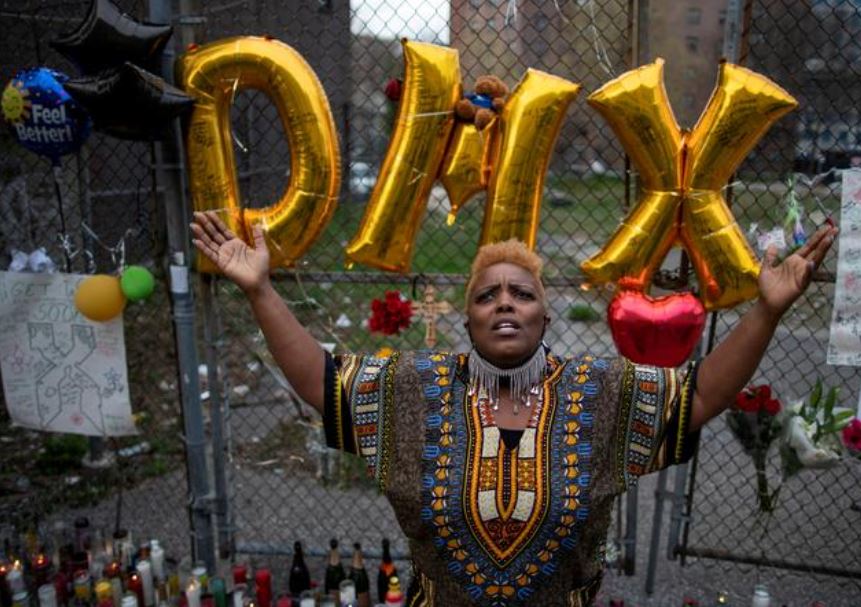 FILE PHOTO: A woman prays at a makeshift memorial for rapper and actor DMX, whose real name was Earl Simmons, outside White Plains Hospital, after he died at the age of 50 in White Plains, New York, April 9, 2021. (Image credit: Reuters)

American rapper and actor Earl Simmons, known by his stage name DMX or Dark Man X, will be mourned by fans around the world in a livestreamed event from Brooklyn’s Barclays Center on Saturday.

Simmons, 50, died on April 9 after suffering a heart attack a week earlier, which many media outlets initially attributed to a drug overdose.

The memorial at the Barclays Center will be closed to the public but will be streamed live on DMX’s YouTube account at 4 pm ET (2000 GMT).

A second event will be broadcast live on BET Sunday at 2:30 pm ET (1830 GMT) from an undisclosed church in the New York City area.

His chart-topping songs included “Party Up (Up in Here)” and “X Gon’ Give It To Ya.”

The Yonkers, New York native’s career had been marked by legal troubles and prison time, and a well-publicised struggle with drug addiction.

The musician’s family, in a statement to People magazine, said he died at New York’s White Plains Hospital with family by his side.

Fans had gathered for days before his death, holding prayer vigils outside the suburban New York hospital, where he had been reported on life support and in a coma.

His rap career had an impressive start, with his debut album in 1998 “It’s Dark and Hell is Hot,” listed as number one on the Billboard 200 chart in the United States.

It sold more than 5 million copies.

Along with being mourned by fans around the world, his death spurred an outpouring of condolences from stars such as Chance the Rapper who said on social media, “Rest in Heaven DMX.”