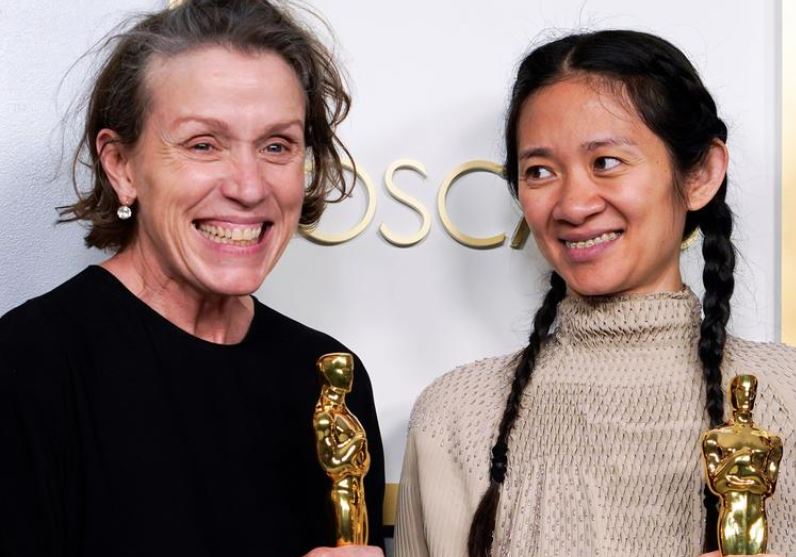 Producers Frances McDormand, left, and Chloe Zhao, winners of the award for best picture for "Nomadland," pose in the press room at the Oscars in Los Angeles, California, U.S., April 25, 2021. (Image credit: Reuters)

LOS ANGELES: Frances McDormand won her third Oscar on Sunday for “Nomadland,” cementing her reputation as one of the best actresses of her generation.

McDormand’s win makes her a member of an elite club that includes Meryl Streep, Daniel Day Lewis and Jack Nicholson as the winners of three acting Oscars. The late Katharine Hepburn won a record four.

“My voice is in my sword. We know the sword is our work. And I like work,” McDormand said in accepting the award, echoing a line from the film.

In “Nomadland,” the 63-year-old McDormand plays a widow who, in the wake of the US economic recession, turns her van into a mobile home and sets out on the road, taking seasonal jobs along the way.

The publicity-shy McDormand was one of the favorites for the best actress prize, which she first won in 1997 for her portrayal of a pregnant police chief in crime drama “Fargo.”

McDormand won again in 2018 for playing an angry mother seeking justice for her dead daughter in dark comedy “Three Billboards Outside Ebbing, Missouri.”

McDormand, who is married to independent movie director Joel Coen, made her film debut in 1984’s “Blood Simple.” She has starred in several of Coen and his brother’s movies, including “Raising Arizona” and “Burn After Reading.”

Her other major roles include “Mississippi Burning,” “Almost Famous” and “North Country,” all three of which earned her Oscar nods, as well as “Moonrise Kingdom” and “Something’s Gotta Give.”

In 2011, she won a Tony award for her portrayal of a single mother in the play “Good People” and in 2015 she picked up an Emmy for her lead role in the television mini-series “Olive Kitteridge.”

McDormand won at Britain’s BAFTA ceremony and took home multiple prizes from film critics for her performance in “Nomadland.”