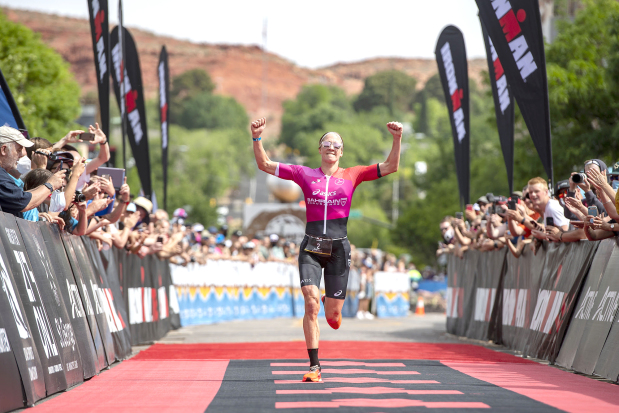 Ryf triumphed over a strong field at the Ironman 70.3 North American Championship in St George, Utah to extend her 2021 winning streak.

The five-time and reigning Ironman 70.3 world champion from Switzerland crossed the finish line with a time of 4:05:47, nearly five minutes ahead of the next competitor.

While Ryf exited the 1.9-kilometre swim leg in third place nearly a minute down to the leader, she assumed the lead early on the 90km bike leg and pushed hard on the rolling course famous for its hills. Starting the half marathon with a six-minute buffer, she won comfortably with the day’s fifth-best run split as the field shuffled behind her in a fierce competition for the last two spots on the podium.

“The field was super strong today and I knew I had to really show my best. I really had to push and I gave it all and I took quite a bit of risk, I went really hard on the bike and I didn’t know if I could still run after that,” she said post-race.

“When I started the run, my legs were totally wobbly and I didn’t even know if I could make the 21K. They actually made time on me and I knew I had to keep it up, otherwise I’m going to get caught. It went down to three minutes and then I knew I had to go really, really hard the last 7K. I picked it up again and I think I really destroyed my legs. So tomorrow I’ll be very sore, but I think everyone will be.”

Bahrain Endurance 13 teammate Holly Lawrence (GBR) finished in sixth place in 4:14:48 after recovering from an apparent asthma attack during the swim to miss the lead group. She said: “Not my day today… knew it’d be a tough day on this course and such a stellar field, congrats to all the girls out there today, especially Daniela who put on a class show.” She looks forward to avenging herself come September when the Ironman 70.3 world championships are held on the same course.

Further south, Gomez took the win at Challenge Cancun in Mexico in 3:46:36. Kicking off his racing season after a training camp, the multiple world champion seemed fully in control over the half iron distance amid hot and humid conditions.

He completed the swim in third at 24:47 with just three seconds separating him from the swim leader. On the bike leg he assumed the lead when Andy Potts suffered a tire puncture, then stayed in touch when Potts pushed hard to get back in front. Gomez hopped off the bike three seconds behind Potts in 2:02:13. It seems the Spaniard knew he could take them all on the run, setting the day’s fastest run split (1:14:40) and putting three minutes between himself and the rest of the field.