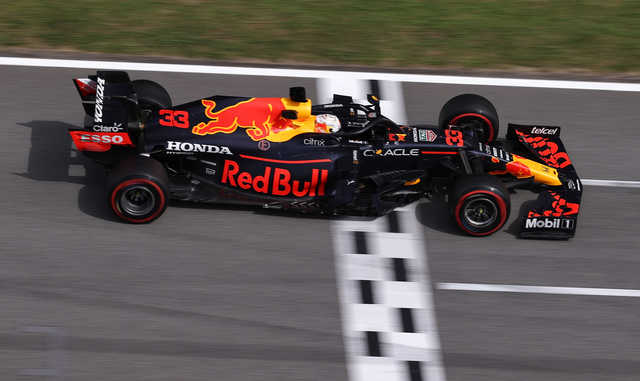 Red Bull's Max Verstappen said he needed a faster car after losing out to Lewis Hamilton for the third time in four races this season.

The Dutch 23-year-old and Mercedes' seven times world champion are in a two-way battle for the Formula One title, with the pair separated by 14 points after Hamilton won Sunday's Spanish Grand Prix.

They have gone wheel-to-wheel in every race but Hamilton has won three to Verstappen's one, with the Red Bull driver second three times despite starting the season with a car that looked the quickest.

"We are not where we want to be, we still have to push hard and catch up," said Verstappen who seized the lead at the start on Sunday and was ahead for most of the race before Hamilton reeled him in on fresher tyres.

"At the moment we are a little bit slower."

Asked to sum up what happened, Verstappen replied with a simple answer: "Too slow. That's how you sum it up. There's not much else to really discuss.

"I tried really everything to manage it as good as I could, the gap, but it's just not enough. Behind you they are just pushing you and you see there's clearly a bit more pace."

Hamilton made a second stop, gambling on being able to make up 20 seconds in 23 laps with fresher tyres, while Verstappen stayed out and became, in his own words, a sitting duck.

He came in for fresh tyres to set the fastest lap after Hamilton had gone past.

"There was not much I could do out there to make a difference," he said. "But nevertheless I think it's still a good result.

"Of course you always want more... I think we shouldn't be happy with a second place at the moment."

Verstappen still beat Hamilton's team mate Valtteri Bottas, who finished third at a track that has been a Mercedes stronghold for years.

Sunday's race was very similar to Hungary in 2019, when Hamilton also chased down Verstappen to win, and the Dutch driver was clear about what Red Bull needed to do to make sure it did not happen again.

"I just need a faster car. It’s very simple. Then you don’t need to get into a situation like that. That’s what we have to focus on."