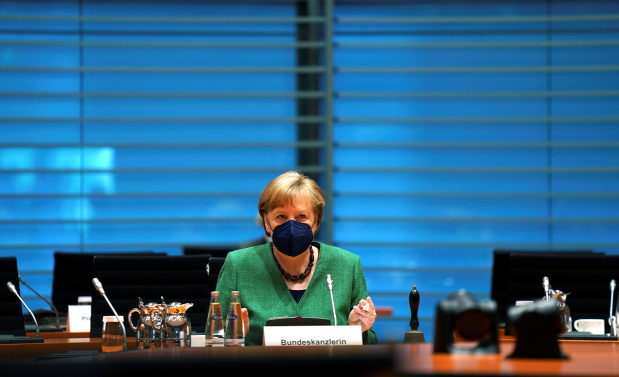 German Chancellor Angela Merkel arrives for the weekly cabinet meeting at the Chancellery in Berlin, Germany May 12, 2021.

Under the new plans, which come as the environmentalist Greens top most polls before a federal election in September, Germany will cut its carbon emissions by 65% by 2030 from 1990 levels, up from a previous target of a 55% reduction.

Germany's Constitutional Court ruled in April that Merkel's government had failed to set out how to cut carbon emissions beyond 2030 after plaintiffs, including North Sea islanders fearing rising sea levels, challenged a 2019 climate law.

The court said it was putting the future of younger generations at risk.

The draft legislation must go to parliament for approval.

Under the plans, landlords will also shoulder half of the additional CO2 price burden related to heating costs.

Merkel's coalition, comprising her conservatives and the Social Democrats (SPD), has moved fast to draw up the new plans in a bid to limit the damage from the court ruling.

Both parties are keen to show a commitment to climate protection and not let the Greens, leading most polls, dominate the agenda.

Hitting the targets looks like a big challenge for Europe's biggest economy with its large manufacturing sector.

German emissions are already about 40% below 1990 levels, but experts point out that much of that was achieved in the years soon after German unification when industrial factories with high emissions in the former Communist East were shut down.